U16 side produce fine display against current Victory Shield holders 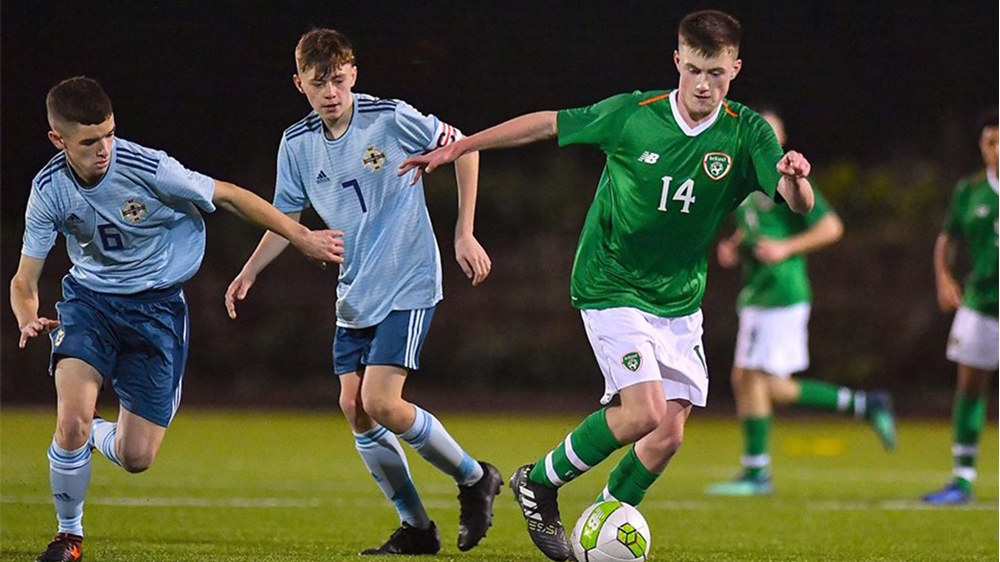 Northern Ireland’s Schoolboys got their 2018 Victory Shield campaign off to a flying start with a fine win against their counterparts in the Republic of Ireland.

Two late goals helped them ease past the Republic, the current shield holders, on a 3-1 scoreline in Co Kerry.

This year’s Under-16 Schoolboys’ competition is being organised by the Football Association of Ireland’s Schools department on behalf of the Schools’ Association Football International Board.

The first half of the game, which was played at Mounthawk Park in Tralee last night, was pretty even, although Northern Ireland shaded it in terms of possession.

Both sides had opportunities before the first clearcut chance fell to Republic striker Oliver O’Neill but he directed a cross from Lee Harkin over the bar.

Then Republic midfielder Ben McCormack smashed a shot against the post before striker Louie Barry’s long range effort was palmed away superbly by Northern Ireland keeper Conner Byrne on 32 minutes.

After the break, however, Northern Ireland started to get a grip on proceedings and they deservedly took the lead on 62 minutes when Linfield attacker Ross McCausland drilled the ball into the net from just outside the area.

The Republic drew level just a minute later when O’Neill pounced on a mistake by a defender and slammed the ball home.

The home side pushed forward – cheered on by a 500-strong crowd – but Northern Ireland launched a superb counter attack on 85 minutes which resulted in them taking the lead. Following a flowing move substitute Ciaran McGuckin (Rotherham United) was on hand to stroke the ball into the corner of the net.

And St Oliver Plunkett player Sean Stewart put the icing on the cake in stoppage time with another lovely finish.

The Victory Shield was presented to SAFIB in 1947 to mark, as suggested by its title, victory by the Allies in World War II - and has been played for continuously since then. England have not entered for the past few years, so Northern Ireland’s U16s are facing Wales, Scotland and the Republic in the 2018 tournament this week.

Northern Ireland will be hoping to produce another positive display in their second game in the competition, which is against Scotland at Mounthawk tomorrow (14 November, 18.00). Their final game is also at Mounthawk on Friday when they take on Wales (13.00).