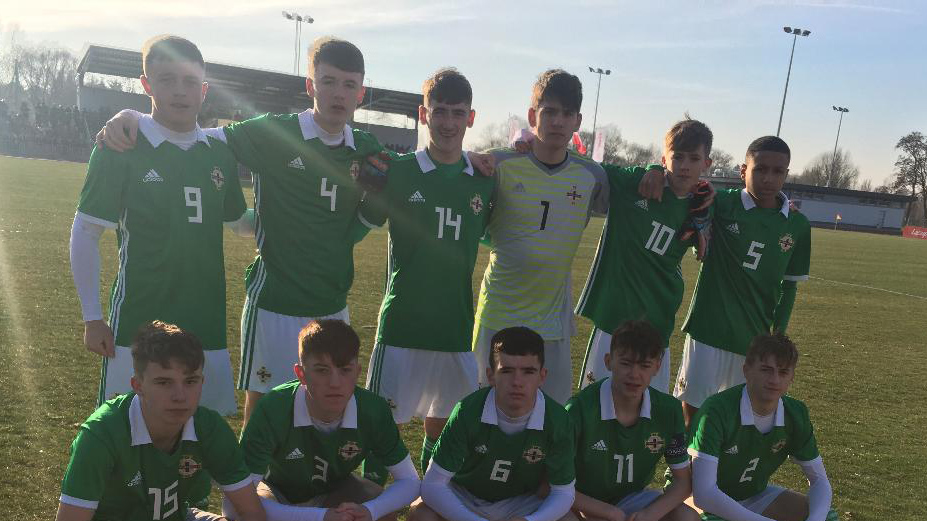 Poland proved too strong for Northern Ireland’s U16s in the second of two challenge matches this week.

The Northern Ireland Schoolboys team, fresh from their Victory Shield success, managed to secure a goalless draw against the experienced Polish U16 team at the start of the week.

However, the second and final game of their short tour to Poland was a struggle for the Northern Ireland boys and they were well beaten by their hosts in Poznan yesterday. The final score was 4-0.

Poland, who had lost only once in their 11 previous outings, started strongly and took the lead after 13 minutes when Filip Wilak pounced on a defensive error and beat Northern Ireland keeper Conner Byrne with a well placed shot into the corner of the net.

The hosts doubled the lead after 27 minutes with a controversial goal. A corner on the left was cleared to the edge of the box and when Mateusz Legowski returned the ball with a header Wilak, in an offside position, appeared to obstruct Byrne as the ball dropped into the net. Despite protests the referee ruled that Legowski’s effort would stand.

On the half-hour mark a great run down the left by Conor Bradley ended with the winger being brought down just outside the penalty area. The Northern Ireland skipper was injured in the tackle and had to be substituted, which was a blow to the boys in green and white. The resulting free kick was scrambled away by the home defence.

After the interval Poland continued to dominate and substitute Szymon Wlodarczyk netted from close range on 68 minutes.

And then, with the last kick of the match, Wlodarczyk completed the scoring, beating substitute keeper Oisin Gibson with a low drive.