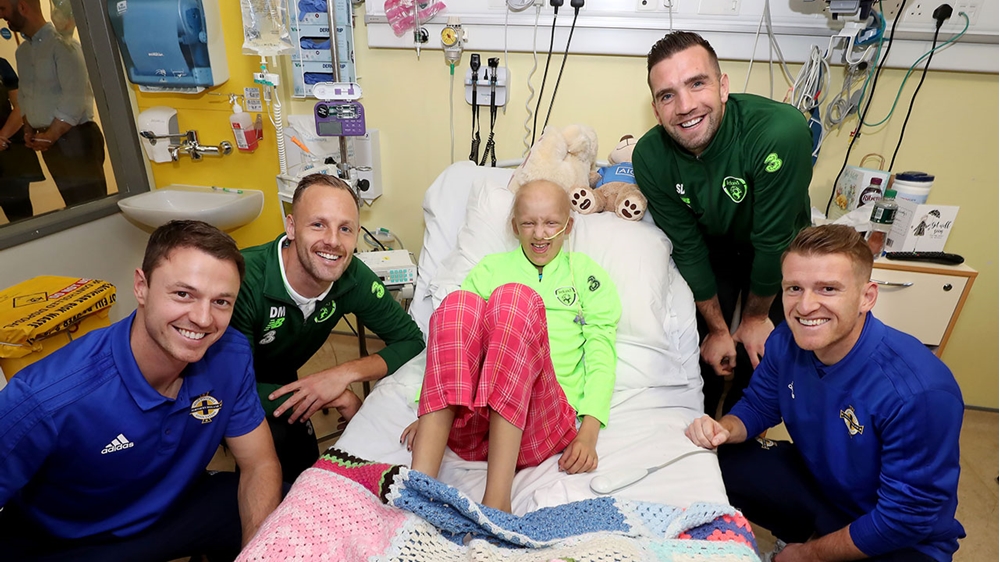 Players from the Northern Ireland and Republic of Ireland football squads have together visited Ireland’s largest paediatric hospital, Our Lady’s Children’s Hospital, Crumlin, to support children with cancer and to highlight the work of medical and caring staff who help to fight the disease.

The four international footballers also sought to use the visit to showcase the work of Cancer Fund for Children, an all-Ireland charity which supports children and young people diagnosed with cancer, and their families, following a diagnosis. Cancer Fund for Children plan to build a new therapeutic short break centre in Connacht for families across Ireland affected by childhood cancer - similar to their existing Daisy Lodge in Northern Ireland.

The Republic of Ireland’s Shane Duffy and David Meyler were joined by Northern Ireland’s Jonny Evans and Steven Davis in touring the ward. The four internationals spent time speaking to children and staff talking about their football careers and hearing individual stories.

Dr Cormac Owens, Consultant Paediatric Oncologist at Our Lady’s Children’s Hospital, Crumlin (OLCHC) said: “We were extremely proud to welcome the Republic of Ireland and Northern Ireland soccer international players to OLCHC Children’s Cancer Ward. The children and families had a fantastic day getting autographs and photos of their sporting heroes and enjoyed talking to them about their fitness regime. OLCHC works in collaboration with Cancer Fund for Children which provides complimentary therapeutic short breaks for its families attending the Cancer Unit at OLCHC and we look forward to the construction of new facility in Connacht which will provide short breaks for families both North and South."

Northern Ireland captain, Steven Davis, said: “It was great to take some time out of training this week to visit this hospital and to meet the remarkable kids and the incredible staff who work here. The Northern Ireland team has supported the work of Cancer Fund for Children since EURO 2016 and it was excellent to see how that charity helps kids and families across the island of Ireland. It was also great to be with Shane and David to show that no matter what team we play for, everyone is together in the fight to help kids beat this disease.”

Republic of Ireland defender, Shane Duffy, said: "It was a very humbling experience visiting the Hospital and seeing the fantastic work being done by the staff and carers. But the bravery of the kids is really extraordinary...it takes your breath away at how strong they are every day. We wanted to give them a little lift and show some support because they are not alone in their fight. It was good to link up with the lads from the Northern Ireland team too - proving that the two countries can work together."

Fans can donate £5 to Cancer Fund for Children by texting GAWA to 70660.

The money will help support the Cancer Fund for Children’s Road Miles Scheme, a programme that provides vital financial grants for families who have been affected by cancer and which helps cover the cost of travelling to and from the main cancer treatment centres in Northern Ireland.