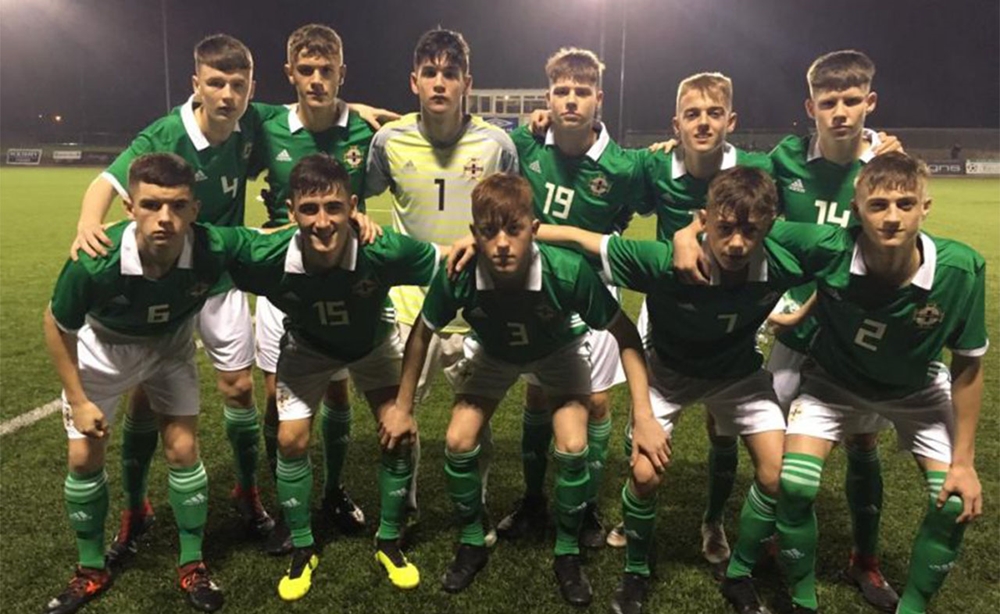 Northern Ireland’s Schoolboys have Victory Shield glory in their sights after drawing with Scotland in Co Kerry last night.

The 1-1 draw against the Scots means Northern Ireland will win the shield for the first time since 2000-01 if they defeat Wales tomorrow.

Northern Ireland defeated the Republic of Ireland 3-1 in their first game in the tournament on Monday, while the Scots drew 1-1 with Wales. The Republic hammered Wales 4-0 yesterday, and that means Northern Ireland are guaranteed to lift the trophy if they beat the Welsh.

In last night’s game against Scotland at Mounthawk Park in Tralee, Gerald Boyle’s side had to dig deep and battle hard to get a point after having a player sent off on the half-hour mark.

Scotland took the lead on 20 minutes with a goal from striker Christopher Mochrie, who beat Conner Byrne at his near post with a clinical finish.

Boyle shuffled the pack at half-time, bringing on three subs, and one of them, Charlie Allen, went close just after the restart with a low left foot drive which drifted inches wide of the post.

They equalised soon after though. Another one of the substitutes, Euan Williams, picked up the ball in the 50thminute, brilliantly cut inside his marker from the right and unleashed an unstoppable shot which beat the keeper low to his left. It was a cracking goal.

Two minutes later Ross McCausland almost gave Northern Ireland the lead when he shot across the keeper, but his effort just went wide of the post.

On the hour Scotland’s Alex Lowry spurned a good chance when he shot wide from inside the box.

Northern Ireland’s defence were outstanding as they withstood late Scottish pressure, and on the counter attack Northern Ireland looked threatening. Substitute Dale Taylor raced through the heart of the Scottish defence but his pass to McCausland was slightly overhit.

Despite five added minutes Scotland could not breach a solid Northern Ireland rearguard in which centre-backs Lewis MacKinnon and Aaron Donnelly were outstanding.

Overall it was a tremendous team display from the Northern Ireland Schoolboys.

Manager Boyle said afterwards: “I was delighted with the performances of all the boys and how they adapted tactically to Scotland’s set-up, especially going down to 10 men so early in the game.

“We now want to push on and bring the Victory Shield home outright for only the second time in 73 years.”

This year’s Victory Shield Under-16 Schoolboys’ competition is being organised by the Football Association of Ireland’s Schools department on behalf of the Schools’ Association Football International Board.

Northern Ireland’s final game in the 2018 tournament is also at Mounthawk Park in Tralee. They face Wales there at 13.00 tomorrow.