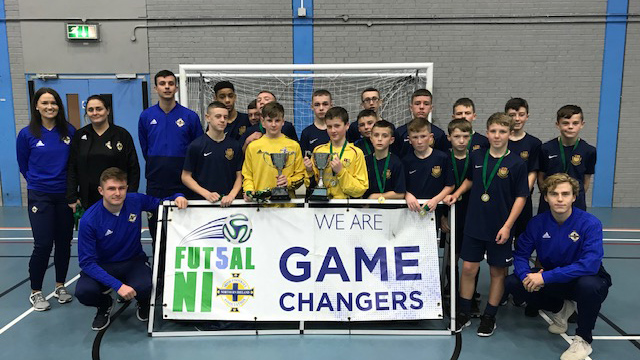 In the boys’ section Belfast school Boys’ Model won the two trophies up for grabs at the tournament – and St Cecilia’s from Derry-Londonderry clinched the double in the girls’ section.

More than 30 teams qualified from regional tournaments across Northern Ireland for the national finals, which were staged in Belfast’s Shankill Leisure Centre.

The were five regional competitions for girls and four for boys, with 124 schools attending and over 1000 participants.

At the national finals Boys’ Model and St Cecilia’s College showed great futsal pedigree by being crowned champions in both the Year 9 and Year 11 age groups. The matches were extremely competitive.

In the boys’ section Boys’ Model successfully defended their Year 11 title and had a convincing win over Ballyclare Secondary in the final, while their Year 9 team emerged triumphant from a very tight and tense decider against Belfast rivals Ashfield Boys. The two teams could not be separated in normal time and it took penalty kicks for the North Belfast school to claim their second trophy of the day.

In the girls’ section St Cecilia’s faced tough competition from St Louise’s (Belfast), Kilkeel High and Mercy College (Strabane) but in the end were well worth their status as national champions at Year 9 level.

In the Year 12 decider they needed penalties to clinch the double following a very close game against St Joseph’s College, Belfast.