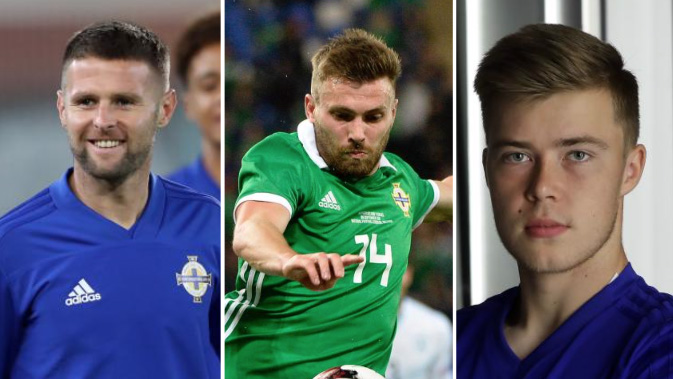 Leeds United moved into second place in the Championship as Stuart Dallas ended his 14-month goal famine to give the Yorkshire side a crucial 1-0 victory over Reading at Elland Road last night.

Dallas, whose last goal for the club came in a 2-0 home success against Birmingham in September last year, was again named at right-back for the encounter with Reading and his performance earned praise from Leeds boss Marcelo Bielsa.

“Stuart is a multi-talented player who can play in many positions,” declared Bielsa. “He attacks with a lot of surprise and he’s strong in defending.”

Leeds also had to thank Northern Ireland goalkeeper Bailey Peacock–Farrell for the three points though after the 22-year-old pulled off a stunning one-handed save from Marc McNulty’s penalty in the final minute.

Peacock-Farrell, who missed United’s weekend win over Bristol City with a knee injury, admitted that the team had done their homework on Reading prior to the game.

“Every team will always do their analysis on the opposition and we always go into games well prepared,” Peacock-Farrell told the official Leeds United website.

“When the penalty was awarded I thought, ‘it’s my time, I’ve got to step up and try and save my team here’ – thankfully I guessed right.

“I made up my mind quite early as I looked at the guy’s body shape as he was about to take the penalty.”

Elsewhere in the Championship Ollie Norwood scored a wonder goal as Sheffield United maintained their push for promotion with a 3-2 success at Brentford.

The former Manchester United trainee, who was named as skipper for the night, unleashed a curling, first-time effort from outside the box into the top corner just fifteen minutes into the game for his second goal of the season.

Providing an assist for United’s winner was striker Conor Washington, who was making only his second start for the Blades since joining them back in August from Queens Park Rangers.

“Conor gave us something a little bit different out there,” said United boss Chris Wilder after the game. “He’s waited patiently but we thought he was right for this game because of what he brings to the table.”

International skipper Steven Davis finally got some game time with Southampton when he came on as a 73rdminute substitute in the Carabao Cup tie with Jonny Evans’ Leicester City.

The night ended in disappointment though for the 33 year-old as the Foxes went through to the quarter-finals of the competition after winning 6-5 in a penalty shoot-out.

It was a good night for Northern Ireland players in general with Liam Boyce, Jamie Ward, Gavin Whyte, Ben Kennedy and Luke McCullough all weighing in with assists for their respective clubs.

Meanwhile, in League One, former Northern Ireland under-21 midfielder Callum Camps scored his first of the season as Rochdale fell to a 4-2 defeat at Oxford United, while midfielder Michael O’Connor rescued a point for Lincoln City at ten-man Oldham Athletic.

The Imps relinquished top spot in League Two to MK Dons following their 1-1 draw with O’Connor admitting the visitor’s performance was not acceptable.

“I thought the performance was very poor,” stated the former international. “From the off, we couldn’t get going. We didn’t press enough, we looked leggy and the quality wasn’t there.

“We left ourselves open to counter-attacks late on. It’s a tough place to come so you need to respect a point, but it’s two points dropped after they had a man sent off so early on.”