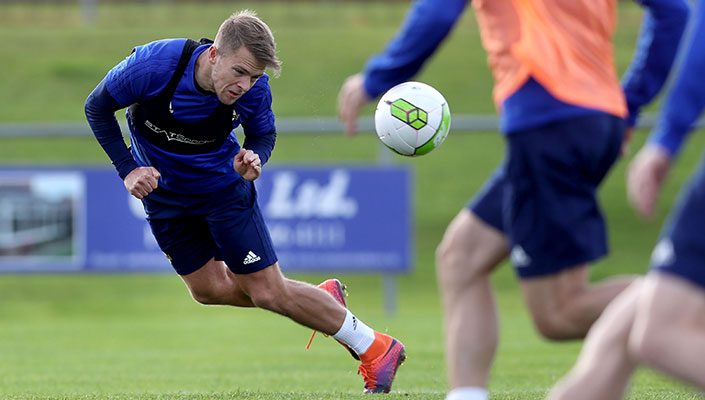 Winger Jamie Ward struck his first goal for Charlton Athletic as the Addicks moved into a play-off place in League One with a convincing 3-1 victory over Bristol Rovers at the Valley on Saturday.

The 32-year old opened the scoring for the south-London side after just ten minutes to register his first for the club since joining them on-loan from Nottingham Forest back in August.

Following the game Ward revealed that there was a touch of good fortune about his goal.

“It hit my chin, hit my chest and rolled onto my thigh!” said Ward, “Everyone was saying it was a great first touch, but it was just nice to be able to get into that position and finish it off.

“In training, I’ve been hitting everything apart from the net so it was nice to see it go over the keeper and bounce into the net.”

Charlton Athletic boss Lee Bowyer admitted it was a real bonus to be able to have a player of Ward’s calibre in his side.

“Jamie brings something different we didn’t have,” said Bowyer. “Cleverness, awareness - you can tell he’s played up in the Championship, he’s very clever, an international player.

“We’ve been lucky to have him. His goal was a great finish. To have the willingness to run from the edge of your own box, the length of the pitch, trust me it’s not easy.”

Elsewhere in League One, Jordan Thompson chalked up his third of the season for Blackpool who impressively defeated Liam Boyce’sBurton Albion 3-0 at home to move into seventh place in the table.

Speaking to stevenagefc.com Kennedy said: “Once I saw it go over the wall I hit it sweet enough and I thought ‘this can go in’ and it did!

“We had a bad result last week and there is nothing better than to bounce back at home against the team that is top of the league.

“I think we dominated, especially in the second half and I think we were the better side and deserved to get the three points.

“We know on our day that we are as good as anyone in this league. We have got good players that have won promotion and there is no reason why we can’t beat teams like MK Dons.”

In Scotland, striker Billy Mckay continued his good form in front of goal when he hit his 12thgoal of the campaign as Ross County recorded a 2-1 home win over Dunfermline Athletic to move into second spot in the Championship table.

Meanwhile, in the Premier League in England, both Jonny Evans and Craig Cathcart started for their clubs on Saturday while Steven Daviswas an unused substitute in Southampton’s 3-2 defeat away to bottom club Fulham.

Finally, goalkeeper Bailey Peacock-Farrellmissed Leeds United’s 2-0 win over Bristol City with a knee injury, though, on a positive note, striker Will Griggreturned to action when he came on as a substitute in Wigan’s scoreless draw with Reading after missing five games with a hamstring injury.