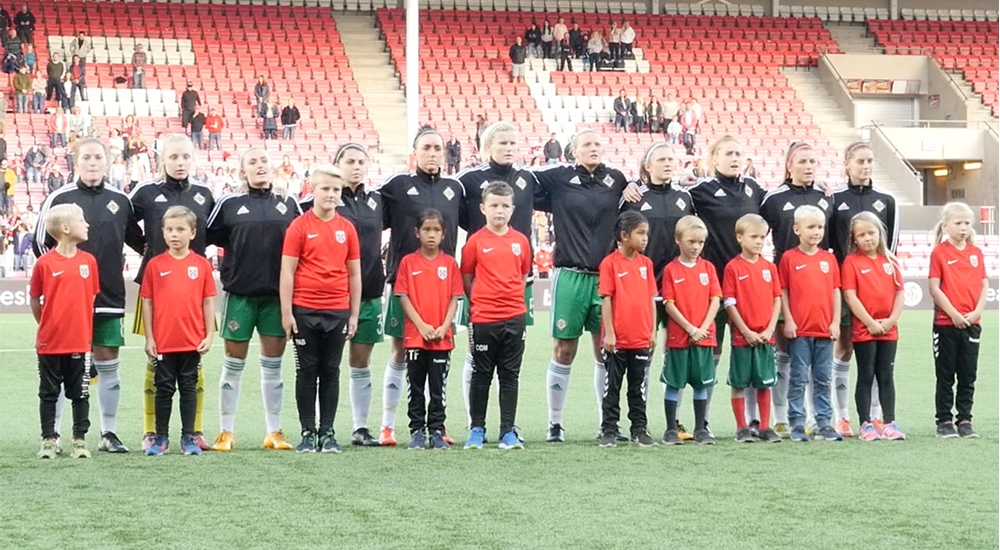 Northern Ireland began their Women's World Cup qualifiers with a 4-1 defeat in Norway.

Manager Alfie Wylie handed a senior debut to 16 year old keeper Lauren Perry who was part of the Northern Ireland squad at the UEFA Women's Under 19 Championships.

With Simone Magill ruled out, manager Alfie Wylie opted to lead the line with Furness as Catherine Hyndman came in to the left side of midfield.

Perry was introduced to senior football in the opening moments but the young keeper didn't look out of place.

First she parried a shot away from Reiten just outside the box and followed that up moments later with a block from six yards as Lisa-Marie Utland had space to get a shot away.

But the resistance would end as Norway took the lead on 15 minutes as Reiten struck past Perry.

Rachel Furness led the line well, supported by Captain Marissa Callaghan, as the Senior Women pushed for the equaliser.

And it was Furness who created the best chance of the half after winning a free kick 20 yards out. Her free kick was destined for the top corner only to be excellently met and pushed over by Norway keeper Ingrid Hjelmseth.

The first half looked to be ending at 1-0, until Norway won a penalty in the final seconds of the half. Graham-Hansen stepped up and her effort hit the underside of the bar to beat Perry and give them a 2-0 lead.

Norway extended their lead to 3-0 after 52 minutes as Utland nipped in at the front to squeeze the ball past Perry from what seemed an impossible angle.

Even with the 3-0 deficit, the Senior Women continued to defend well as Norway pressured but defenders Ashley Hutton and Julie Nelson continued to block the shots coming their way.

But Caragh Milligan got a consolation for Northern Ireland as Rachel Newborough played a great ball down the line for Furness who looked up and found an unmarked Milligan in the box to make it 3-1.

The Senior Women were again hit in injury time as Reiten got her second to secure a 4-1 win for the hosts.

Attention now turns to their next qualifier on Tuesday 19 September against the Republic of Ireland at Mourneview Park. Kick off 7:30pm with free entry.