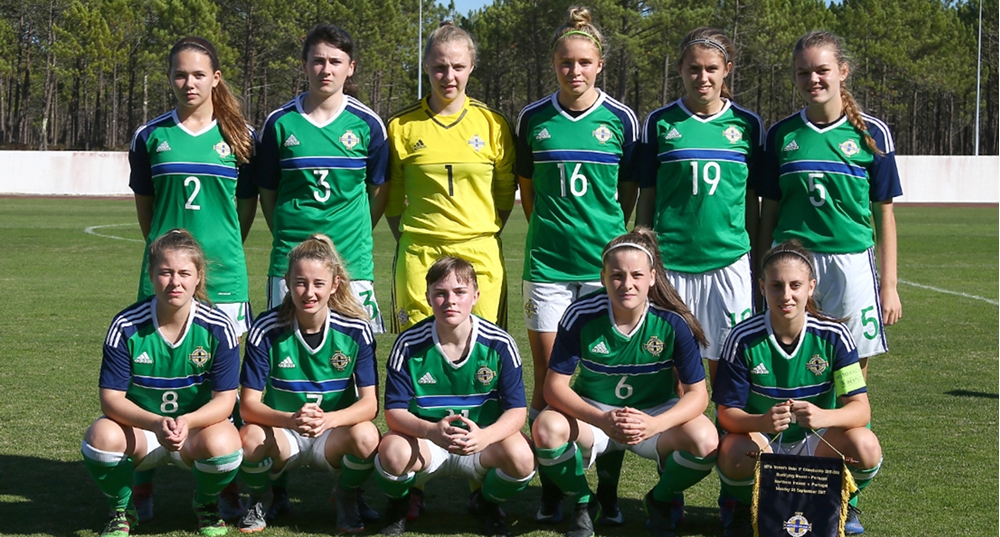 Northern Ireland’s Women’s Under-17 team were narrowly beaten 2-1 by Portugal in their opening UEFA European Women’s U17 Championship qualifier.

The girls in green began their quest for a place at the 2018 WU17 finals in Lithuania at the Complexo Desportivo in Tocha, Portugal.

The Portuguese started yesterday’s qualifying round tie brightly and immediately put Northern Ireland under pressure. And they took the lead after only two minutes through Telma Encarnacao.

Portugal continued to push forward and Marta Ferreira had a shot blocked in the fifth minute.

Portugal then had a few more chances with Ferreira, Ana Albuquerque and Encarnacao all putting efforts wide of the target.

Early in the second half Perry made another good save from Encarnacao before Northern Ireland equalised through Leah McEvoy in the 46th minute.

Encarnacao then had another effort before she scored on 54 minutes to put Portugal ahead again.

Towards the end of the game Portugal pressed again with Andreia Jacinto and Albuquerque both shooting wide of the target.

It was a decent display from Alison Nicholl’s side. They defended well and created some good chances. Portugal had 15 attempts in the game with four on target, while Northern Ireland had four efforts, three of which were on target.

The Women’s U17s will be in action again on Thursday 28 September (3pm start, local time) when they take on Austria in the mini qualifying tournament in Portugal. The venue is Centro de Treino stadium in Luso.

And then they will face Georgia, who were beaten 13-0 by Austria yesterday, in their final qualifying round game on Sunday 1 October (4pm). The venue is the Sergio Conceicao municipal stadium in Coimbra.