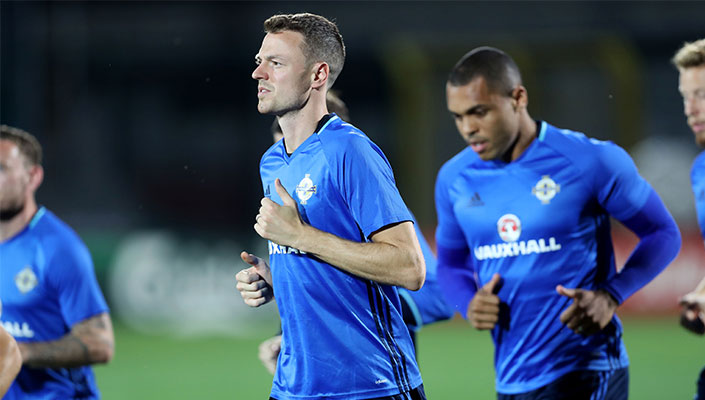 It was a relatively quiet transfer window for players from Northern Ireland with only a handful switching clubs before Thursday’s 11 pm deadline.

Despite growing speculation that West Brom’s Jonny Evans was set for a big money move to either, Arsenal, Leicester City or Manchester City, the 29-year-old remains at the Hawthorns for the time being.

One player in Michael O’Neill’s squad who did change clubs though was defender Adam Thompson, who, despite only signing a three-year deal with League One Bury in June, has joined Bradford City on a season-long loan.

“He is a strong and committed centre half, and he has great experience at this level,” said City boss Stuart McCall. “It hasn’t quite worked out for him at Bury in the opening couple of months though, and it came out of the blue that he was available.

“Greg (Abbott) worked quickly to get this one over the line while Adam was training in Manchester with Northern Ireland,” added McCall.

“I believe he is actually rooming with Shay McCartan at the moment which is a nice coincidence.”

Meanwhile Stuart Dallas this week committed his long-term future to Leeds United after penning a new three-year deal which ties him to the Championship outfit until the end of 2019/20 season.

Talking to BBC Radio Leeds, Dallas said: “I'm happy here and it’s where I want to be. I feel as if I’m going to be part of something special this season.

“I knew I was going to be linked with a few teams but this is where I call home and it was an easy decision to stay.”

Shrimps’ boss Jim Bentley said: “Adam will be a great addition to the squad. He is the right age and has experience at this level and he will give us the attacking options we have been looking for.”

Bruce, who has two full caps to his name, actually scored on his debut for Bury in a 4-1 defeat at Wigan last month.

Elsewhere, former Hull City and St Johnstone midfielder Eoghan McCawl has joined Glentoran until the end of the season after being released by the Scottish club last May.

Making the move into full-time football though is Linfield striker Paul Smyth, who starred for the Northern Ireland under-21 team last night in the 1-0 success over Albania.

The 19-year-old secured a two-year contract with Queens Park Rangers on Bank Holiday Monday and admits it has always been his ambition to play professional football in England.

“It’s a dream come true – it doesn’t get much better than this!” he told the official QPR website. “I know it’s a massive step up for me, but it’s one I’m relishing. I’m hungry to do well here!”

Finally, Northern Ireland left-back Ryan McGivern is on the search for a new club after leaving League One Shrewsbury Town yesterday by mutual consent.