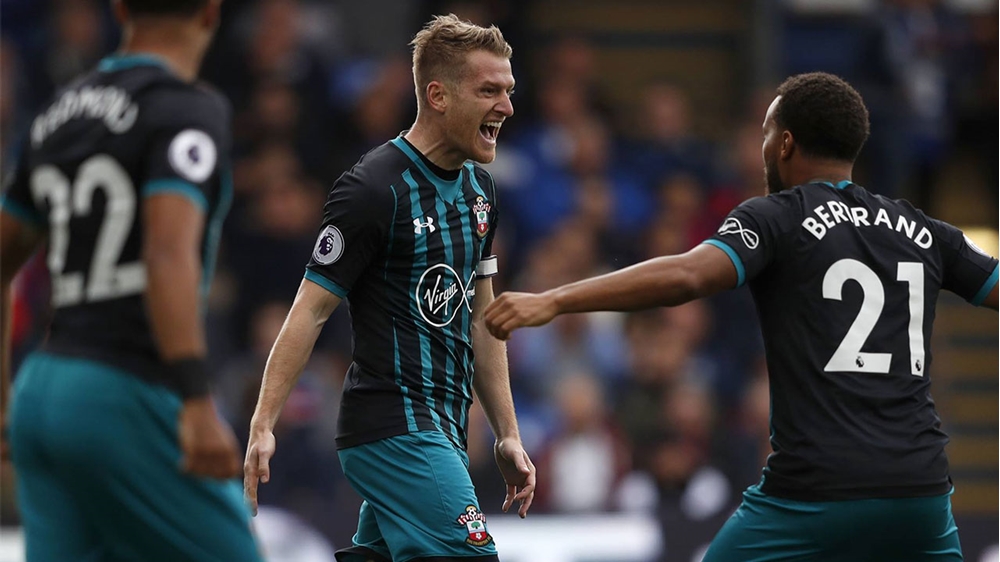 Northern Ireland skipper Steven Davis celebrated his 200th appearance for Southampton in style at the weekend when he scored the winner in the Saints 1-0 success at Crystal Palace.

The midfielder struck in the sixth minute to chalk up his first goal for the Saints since ironically finding the net against Palace in a 4-1 win at St Mary’s in May 2016.

After the disappointing 2-0 home defeat to Watford last time out, Davis felt Saturday’s performance against Roy Hodgson’s side was a truer reflection of how the South Coast outfit can play.

“That was a lot more like us after the disappointment of last week,” the 32-year-old told the clubs official website. “Everybody came away a little bit frustrated, angry and disappointed after the Watford game.

“It was important to come here, bounce back and show those qualities. I thought we did that with a real level of desire today.

“We won’t get carried away,” he added, “We need to show that same desire and quality every week and make sure our levels don’t drop.”

Meanwhile, striker Kyle Lafferty, who turned 30 on Saturday, marked the special birthday with his sixth goal of the season to help Hearts secure a 2-1 victory at Hamilton, their first success under new boss Craig Levein.

The Fermanagh-born forward, who scored from the penalty spot midway through the first-half, believes the new man in charge at Tynecastle has already moulded them into a stronger unit.

“One thing about the gaffer is that he will take no nonsense,” said Lafferty, “If anyone is not working hard then they will be sat beside him.

“We will work for whoever is in charge but I think everyone is doing that little bit extra now because we know we have a manager who wants us to work hard.

“If you are putting in a shift then you are going to be playing.”

Also on the scoresheet over the weekend was midfielder Ollie Norwood whose 31st-minute strike turned out to be a consolation goal as Fulham went down 2-1 at Burton Albion in the Championship.

It was the 26-year-old’s first goal in club football since hitting a winner for Reading in a 2-1 victory over Nottingham Forest in April 2016.

Will Grigg finally got his season up and running with his first goal of the campaign in Wigan Athletic’s comfortable 3-0 win at home to Bristol Rovers in League One.

It was the 26-year-old’s first league goal for the Latics in nearly 12 months, however, Wigan’s assistant manager Leam Richardson admitted he never had any doubt that Will Grigg would rediscover his touch.

“I was unaware he hadn’t scored for so long, I don’t really look at stats for good players,” said Richardson. “I just see good players as good players.

“In training Will has been banging them in with ease. “He’s getting his chances - he had a few chances even before his goal.

“Some people probably forget he’s had a very bad injury, and you look at the length of time he’s been away from the pitch.

“It doesn’t concern me how long Will Grigg’s not scored for,” added Richardson, “because I know for a fact Will Grigg will be up there with the top goalscorers in the league come the end of the season.”

In fact it was a bumper weekend for Northern Ireland players hitting the target. Not surprisingly, Billy Kee took his tally to six this term with a goal in Accrington’s 2-1 success at Chesterfield while former Northern Ireland under-19 winger Jordan Jones earned Kilmarnock a point at Aberdeen with his first of the season.

Also in Scotland defender Callum Morris, who has been in a number of Michael O’Neill’s squad’s in the last couple of years, scored as Dunfermline Athletic moved to top of the Championship with a deserved 3-0 win over St Mirren.

Finally, with less than three weeks to Northern Ireland’s much anticipated encounter with World Champions Germany at the National Stadium, it was good to see that Gareth McAuley had recovered from his thigh injury to be an unused substitute in West Brom’s scoreless draw with West Ham United on Saturday.