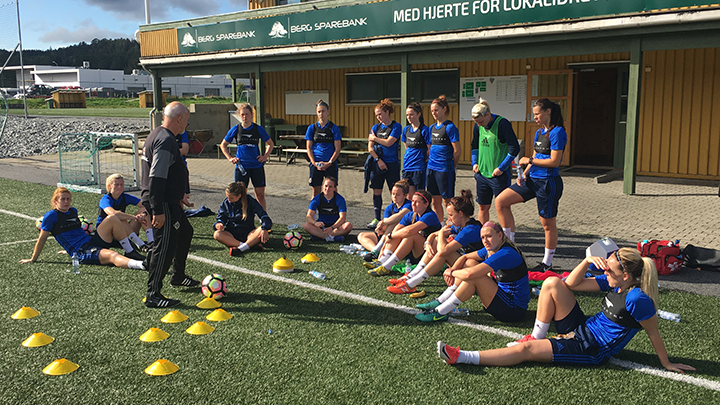 Norway, ranked 14th in the world, will provide formidable opposition for Alfie Wylie’s team at the city stadium in Fredrikstad (17.55 start local time).

The Norwegians, who took part in Women’s Euro 2017 in the Netherlands back in the summer, are top seeds in European Qualifying Group 3, which also features Euro 2017 winners Netherlands, now ranked seventh in the world, as well as Republic of Ireland (ranked 33rd), Slovakia (43rd) and Northern Ireland (60th).

Norway failed to make it past the group stages at Euro 2017 – they lost all three games – but Alfie Wylie believes they have the capacity to quickly bounce back.

He said: “Norway had a five-week camp prior to three weeks at the Euros so they will be very fit and well prepared. Their squad features lots of full-time players who operate in a number of different countries.

“This is obviously a difficult game but one we are really looking forward to taking part in. We have not been together since the start of April but training has gone well with a very good atmosphere and lots of enthusiasm.”

Wylie is without regular goalkeeper Jacqueline Burns and striker Lauren Wade, who were not released to play by their university in America, as well as forwards Avilla Bergin and Kirsty McGuinness and goalkeeper Emma Higgins.

However, he is happy with his panel. “We have a very experienced squad and are almost at full strength,” he said.

Goalkeeper Lauren Perry (16) is expected to make her senior debut on Friday – and it will cap a remarkable year for her. In 2017 she will have played for Northern Ireland’s U17s, U19s (at the Women’s U19 Euros) and seniors as well as in the Champions League with Linfield Ladies, with whom she has just won the Women’s Danske Bank Premiership title.

For the first time Northern Ireland will have three full-time players in the starting line-up: Rachel Furness (Crystal Palace Ladies), Simone Magill (Everton Ladies) and Laura Rafferty (Brighton and Hove Albion). Furness, with 16 goals, is the record scorer for the Northern Ireland senior women’s team and would no doubt love to add to her tally against the Norwegians.

Northern Ireland’s second game in the campaign is against the Republic of Ireland at Mourneview Park in Lurgan on Tuesday 19 September (19.30 kick-off, free entry).