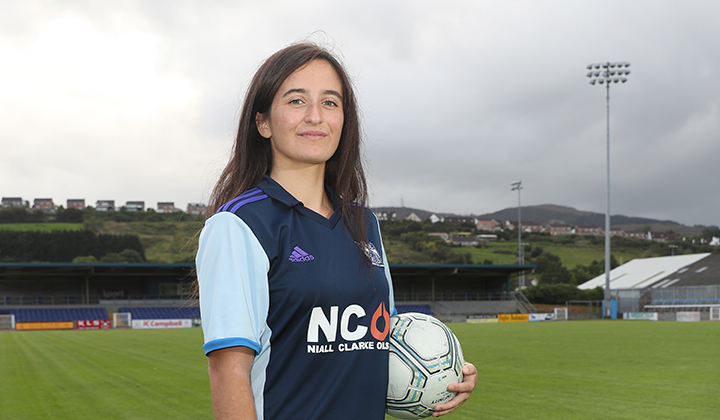 There will be a new name on the Women’s Irish FA Challenge Cup on Thursday night as Sion Swifts Ladies and Newry City Ladies battle it out for the trophy.

“Sion knocked out (champions) Linfield along the way. They are hungry for their first big trophy and it is this hunger and their current form which probably makes them favourites,” she said.

However, the Newry captain also insisted there is a hunger to succeed in the Co Down team’s camp after they fell at the final hurdle in two other competitions this year.

Newry were on course to win the Women’s Premiership title a few weeks back but missed out in the end to Linfield Ladies; they lost a title decider against the Blues 4-1. And Linfield also got the better of them in this season’s League Cup Final.

The skipper admits missing out in both competitions has dented confidence but believes her team can bounce back in the Women’s Irish Cup Final, which is sponsored by Electric Ireland.

Moya believes Newry’s strength lies in their counter attacking forward line and she reckons striker Celine Curtis, who signed for the club this season, could have a big say in the game.

Stand-in manager James Feehan also believes Newry can succeed. “We have a lot of skilful players and we play good football. We have had some great battles with Sion down the years and I am expecting the final to be a tough game but winning the cup would top off the season for us,” he said.

It is the first time in the history of the Women’s Irish Cup (started in 2005) that the final will be contested by two teams from outside Belfast.

The game kicks off at 8pm on Thursday. Admission is £5 for adults and £3 concessions. Tickets will be available to purchase on match night from the Ticket Office.

Before the game there will also be a fanzone at the eastern end of the stadium. It will feature inflatables, a speed gun, tunnel and target bins. There will also be giveaways. And Electric Ireland mascots will be there, too.

Electric Ireland is the proud sponsor of women’s football in Northern Ireland. Partnering with the Irish FA, Electric Ireland seeks to break down the perceptions that exist around women’s football through its campaign, Game Changers. The energy provider’s aim is to celebrate female football talent, help boost participation and shine a light on the 10,000 plus Game Changers who play football each week in Northern Ireland. Join the conversation using #GameChangers. Visit www.electricireland.com.