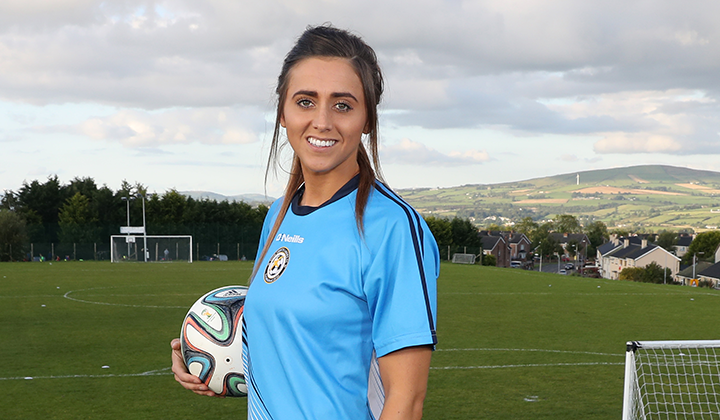 The game on Thursday (7 September) at the National Football Stadium at Windsor Park promises to be a tight affair.

Sion Swifts Ladies captain Kendra McMullan said: “There’s a great team spirit. And once we get on the pitch there’s a lot of desire and passion.

“We will be doing everything we can to lift the cup. We have lots of great young players and a lot of threat going forward, and we have talent all over the pitch. We win together and we lose together.”

And manager Tony McGinley added: “We know Newry are a formidable team but we will give everything in the final.”

On the way to the decider Sion have defeated both of last year’s finalists (newly crowned league champions Linfield Ladies and Cliftonville Ladies) as well as Crusaders Strikers.

And Tyler Toland is a Republic of Ireland international (U17, U19 & Senior), while Zoe McGlynn represents the Republic at U19 level.

It is the first time in the history of the Women’s Irish Cup (started in 2005) that the final will be contested by two teams from outside Belfast.

The game kicks off at 8pm on Thursday. Admission is £5 for adults and £3 concessions. Tickets will be available to purchase on match night from the Ticket Office.

Before the game there will also be a fanzone at the eastern end of the stadium. It will feature inflatables, a speed gun, tunnel and target bins. There will also be giveaways. And Electric Ireland mascots will be there, too.

Electric Ireland is the proud sponsor of women’s football in Northern Ireland. Partnering with the Irish FA, Electric Ireland seeks to break down the perceptions that exist around women’s football through its campaign, Game Changers. The energy provider’s aim is to celebrate female football talent, help boost participation and shine a light on the 10,000 plus Game Changers who play football each week in Northern Ireland. Join the conversation using #GameChangers. Visit www.electricireland.com.