O’Neill and Davis say we will play to win 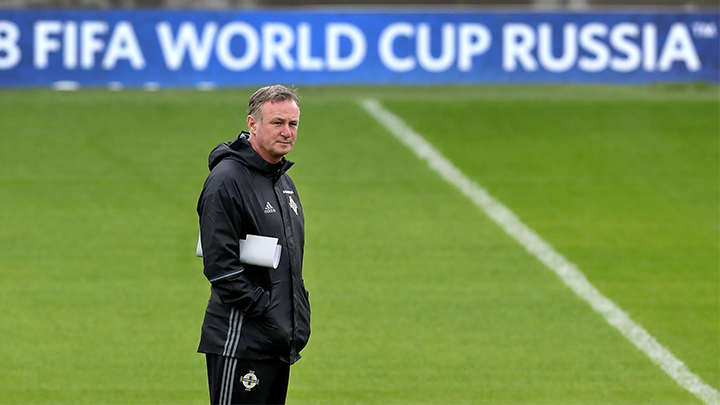 Northern Ireland will be going for the win when they face Czech Republic on Monday evening.

Both the manager and the captain have promised the players will give it their all in the World Cup qualifier at the National Football Stadium at Windsor Park (19.45 kick-off).

Michael O’Neill and Steven Davis, however, say the players are focused on victory in the match.

During a press conference at the stadium today they both said the mentality of the current Northern Ireland squad is play to win.

The Czechs rested a handful of players in the 2-1 defeat to Germany on Friday night, but Steven Davis is not concerned that the visitors may have added freshness. He says he and his Northern Ireland team-mates are well up for the game, which will be played in a red-hot atmosphere.

The Czechs need to win to maintain their hopes of securing second place in the group. In fact they have to win all of their remaining fixtures to have any chance of grabbing runners-up spot in Group C, while Northern Ireland have three opportunities to grab the point they need.

On paper Czech Republic have a strong squad with their players operating in the likes of the Bundesliga, Serie A and Ligue 1 as well as their domestic league.

Their equivalent of Steven Davis is playmaker Vladimir Darida, who plays for Hertha Berlin in Germany. He scored a 25-yard cracker against the Germans on Friday night.

Another player to watch is Michael Krmencik. The Viktoria Plzenstriker can be a real handful if he is on his game.

Northern Ireland, however, are going into the match in high spirits after producing a measured performance against San Marino.

They came out of the game in Serravalle unscathed both in terms of injuries and suspensions; five players are on yellow cards.

Aaron Hughes, who had been a doubt right up until kick-off on Friday, was on the training pitch earlier today.

And Michael O’Neill confirmed that all members of the squad are available for selection.

He is likely to go with a line-up similar to the one that started in San Marino.

Meanwhile, in his notes for the matchday programme, the manager points out:

“Naturally, there is pressure on us to get a result… but I have no doubt the team will handle it well.

"I think our experiences during the Euro 2016 campaign, where we rose to the occasion when we had big prizes to play for, will hold us in good stead.”