Wylie’s team aiming to bounce back after Norway defeat 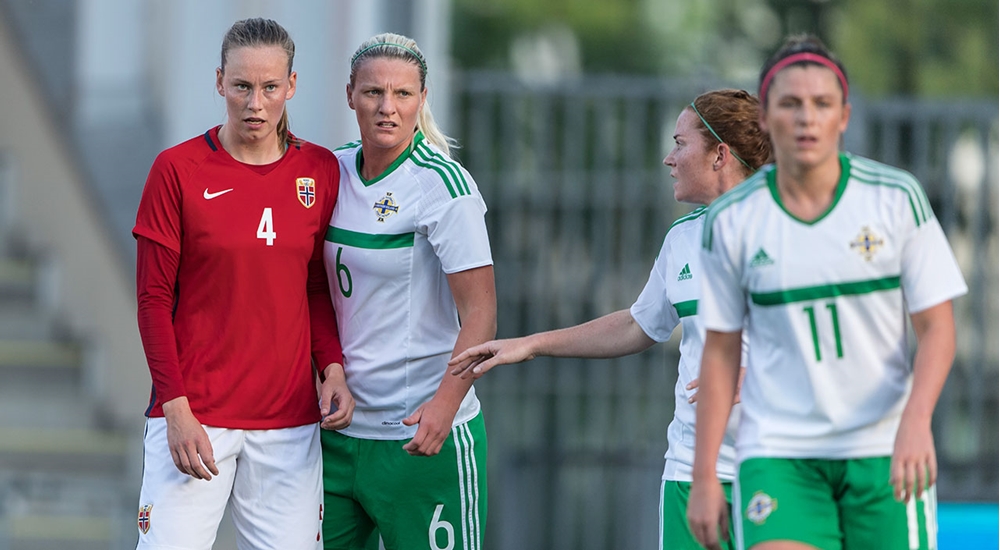 Northern Ireland’s Senior Women will be up against it when they face their nearest neighbours on Tuesday.

Republic of Ireland go into the derby clash at Mourneview Park in Lurgan (19.30 kick-off) as favourites. They are ranked 33rd in the world, while Northern Ireland are currently 60th on the FIFA list.

However, Northern Ireland will be determined to bounce back after beginning their Women’s World Cup France 2019 qualifying campaign on Friday with a 4-1 defeat away to Norway.

It will be the Republic’s first game of the qualifiers and they have assembled a strong squad, many of whom are full-time players. They include Stephanie Roche of Sunderland, Arsenal’s Louise Quinn, Marie Hourihan and Megan Campbell of Manchester City, Niamh Fahey (Bordeaux) and Diane Caldwell (SC Sand, Germany).

And the Republic have been seeded third in Qualifying Group 3, while Northern Ireland are seeded fifth.

Northern Ireland boss Alfie Wylie firmly believes, however, that his side can up their game against their nearest neighbours.

He said: “The 4-1 scoreline (against Norway) did not reflect the game. Although Norway had more opportunities, we managed the game poorly by conceding goals in the last seconds of added time in both halves.

“But we now have the opportunity to put that setback behind us and to immediately learn from those errors and lapses in concentration. This game is a chance for the players to show what they can do against arguably our biggest rivals.”

Wylie will be hoping Everton Ladies striker Simone Magill, who did not play against the Norwegians after picking up an injury in training the day before the game, will be available to return to the fray.

He has drafted in experienced keeper Emma Higgins, who plays for Grindavik in Iceland, even though Linfield Ladies keeper Lauren Perry had an excellent debut for the senior women’s team against Norway.

It is understood Perry is receiving treatment after picking up a knock against the Norwegians.Sion Swifts Ladies captain Kendra McMullan, who did not travel to Norway due to illness, is also available for selection.

However, her club mate Cathy Hyndman is out of the squad after hobbling out of the Norway game. Wylie has drafted in Women’s U19 captain Emma McMaster (Cliftonville Ladies) in her place.