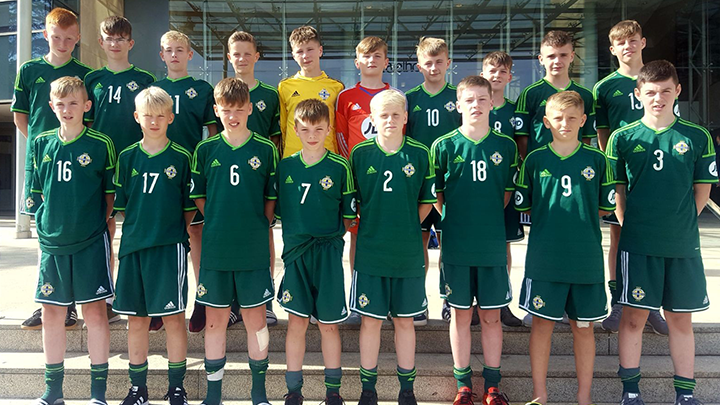 A defeat to Spanish giants Real Madrid was the only blip for Club NI’s U14s at this year’s Madrid Cup.

The Club NI boys registered an impressive six wins out of seven on their way to finishing 17th overall out of 32 teams at the international youth football tournament in Spain.

The annual ARC Madrid Football Cup, staged at Alcobendas in Madrid, features the youth sides of leading European clubs, including Real Madrid, Atletico Madrid, Paris Saint-Germain, Chelsea, Liverpool and Benfica, as well as teams from around the world.

In their first game they defeated Roskilde 2-0. A couple of quickfire goals at the end of the first half from Conor Falls and Harry Wilson saw off the Danes.

Next up were Real Madrid. They put in a battling, disciplined performance against a good Madrid side. Real dominated possession throughout but Club NI restricted them to a handful of opportunities, however goals either side of the break helped the Spanish side to a 2-0 victory.

In their third and final group game Club NI defeated White Plains 4-0. They produced a fine team performance and ran out comfortable winners thanks to goals from Dylan Sloan, Conor Falls, Patrick Kelly and Charlie Lindsay.

Club NI thought they were destined for the Round of 16 stage, however Roskilde lodged an appeal because Club NI made too many substitutions - even though the referee had allowed and encouraged it - during their clash. The tournament organisers subsequently awarded the game to Roskilde.

It meant Club NI were playing to finish between 17th and 32nd when a top ten finish would have been a more appropriate reflection of their performances.

In their fourth game at the tournament they defeated Slovakian side Tatran Presov, and it was a game they dominated from start to finish, creating numerous chances. Conor Falls and Dylan Sloan were again on target, along with Callum Marshall, as they ran out comfortable 3-0 winners.

Game five saw the boys come up against Danish side Aarhus. It was a competitive game and Club NI had to be patient against well organised and disciplined opponents. Club NI took the lead just before the break through Callum Marshall. Aarhus attacked strongly at the start of the second half but Club NI defended and counter-attacked well. And their second came following a fine counter attack move. Marshall was again the scorer.

FK Fyllingsdalen from Norway were next up for the U14s. Club NI started brightest and created three clear-cut opportunities, all of which they failed to convert. And they were punished for those missed chances when they fell behind after giving away possession in the final third. But they drew level on the stroke of half-time through Callum Marshall.

Club NI started the second half brighter and took the lead through a Charlie Lindsay penalty. However, they couldn't see the game out and were pegged back to 2-2. The game went to penalties with Club NI scoring all their penalties (4-2) to taste victory.

The team arguably kept the best until last. They secured 17th position with a super display against Austrian side FC Flyeralarm Admira.

Club NI produced some scintillating football in the opening period against the Austrian Premier League club’s U14 side.

During a dominant first half they scored three times and it could have been more. Falls, Kelly and Sloan all found the net again.

In the second period they didn't quite reach the heights of the first half – and unfortunately the game was ended early due to a serious injury to an opposition player.

Overall the team were excellent at Madrid Cup 2017. They were disciplined and organised out of possession and exciting going forward, according to head coach Pascal Vaudequin.