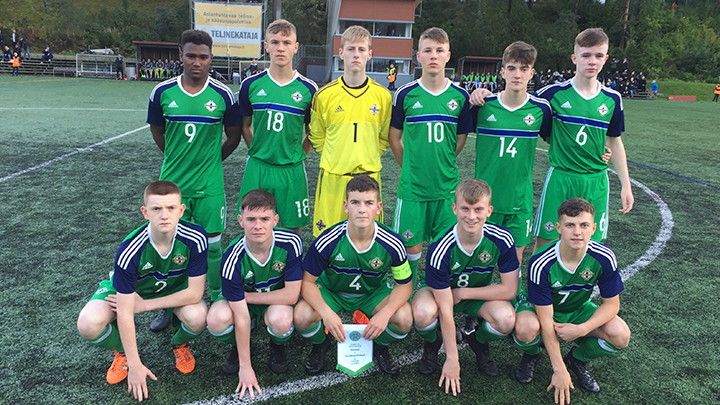 The Northern Ireland Under 16 team maintained their unbeaten record for the year with a successful tour to Finland.  A brace from Alberto Balde secured a 2-2 draw against Finland on Tuesday and two days later Peter McKiernan was on target as the teams drew 1-1.

In the first match Finland went ahead on the half hour when Finnish captain Juho Ojanen cut in from the left and slotted a low right foot drive past David Walsh.  Just before the interval Northern Ireland drew level when Alberto Balde blasted a fierce shot into the roof of the net.

Balde then put the visitors in front after 69 minutes finishing off a great move.  Northern Ireland captain Dylan Boyle broke out of defence before sending Jesse Carson away down the right and when the full back sent over a deep cross Balde rose high to nod in at the far post.

The lead was short lived as one minute later Lassi Forss netted from close range as the Northern Ireland defence was caught out by a quickly taken free kick.

Two days later it was Northern Ireland which opened the scoring as Balde played in Peter McKiernan and the striker held off a challenge to plant the ball past the keeper.

Northern Ireland had strong claims for a penalty turned down when Aaron Brown was upended in the box but in the final minute Martin Salin headed home from close range to level the score.