Preview | Quarter-final ties are all too close to call 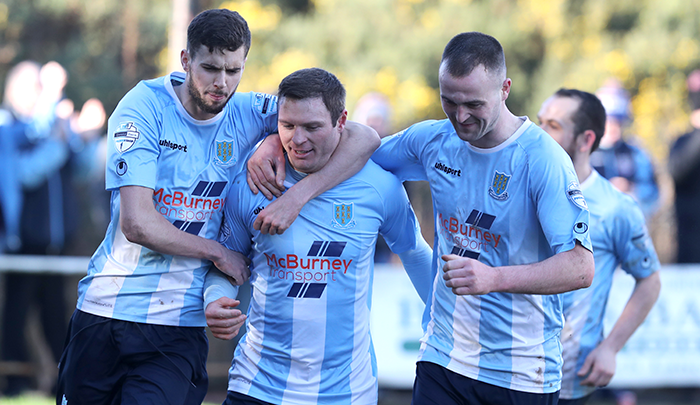 Mouth-watering is an oft repeated phrase among football people the world over, seemingly wheeled out every time a mildly interesting game comes around.

But looking at the Tennent's Irish Cup quarter-final line-up you could be forgiven for thinking it was coined specifically with tomorrow’s four games in mind.

The draw has thrown together the top two clubs in the country, produced a couple of passionate local derbies and pitted a side outstanding on their day and starring the leading scorer in the Premiership against one blazing a trail in the Championship having already tasted cup glory this season.

If form and momentum is any indicator then Ballymena United entertaining Coleraine at the Showgrounds in Ballymena could well be the game of the day.

David Jeffrey has his players riding on the crest of a wave at the minute, Ballymena having lifted the NI League Cup for the first time in their history last month and then securing a top six place, again for the first time since the split was introduced.

But they come up against a Coleraine side undefeated in their last nine outings, winning no fewer than eight of those games.

Indeed the last side to beat Oran Kearney's charges were Ballymena United, first in the League Cup semi-final and then soon after on Boxing Day.

Will the Bannsiders exact revenge or will home advantage see the Sky Blues come out on top once more?

Local bragging rights, as well as a place in the last four, will also be on offer in Mid-Ulster as Portadown welcome Glenavon to Shamrock Park.

The Ports have had a torrid campaign thus far, currently well adrift at the foot of the Premiership, but under Niall Currie there are signs that the club could be on their way to recovery, given recent results against both Linfield and Crusaders.

And what better way to salvage something from the season than a victory over cup holders and near neighbours Glenavon?

The Lurgan Blues haven't been firing on all cylinders lately, although going into the game on the back of three successive clean sheets points to a side that are difficult to beat, and with a cup to defend this might well give them the edge.

If the losing finalists last season, Linfield, want to have any chance of going one better this time around they must overcome the challenge of league champions and table toppers Crusaders at Seaview.

The pair have been locked in a title battle all season, and although Stephen Baxter's side currently enjoy a seven-point advantage they have yet to beat the Blues in 2016-17.

The first two meetings ended scoreless before goals from Aaron Burns and Andrew Waterworth on New Years' Eve saw David Healy's men come out on top on the Shore Road.

Then, as recently as last month, Linfield emerged victorious again in the County Antrim Shield final at Ballymena.

Can the Blues make it three wins in a row or will the lure of a potential league and cup double spur the Crues on?

Completing the line-up, and a no less intriguing game than the others, is Warrenpoint Town's trip to Stangmore Park to face Dungannon Swifts.

Matthew Tipton's side are a massive 14 points ahead of the pack in the Championship and lifted their first senior trophy earlier this year when substitute Josh Lynch bagged the winner in a Mid-Ulster Cup final win over Armagh City.

It’s an impressive track record by anyone's standards but the Swifts have made many sit up and take notice with not only their results but the performances produced along the way - and in Andrew Mitchell they possess a deadly weapon who has led the scoring charts for much of the season.

What way this one will go is anyone's guess. On paper, and with home advantage, the Swifts would appear to be favourites but Town most definitely should not be underestimated.

In fact it could be argued that all four of the mouth-watering ties are impossible to call.