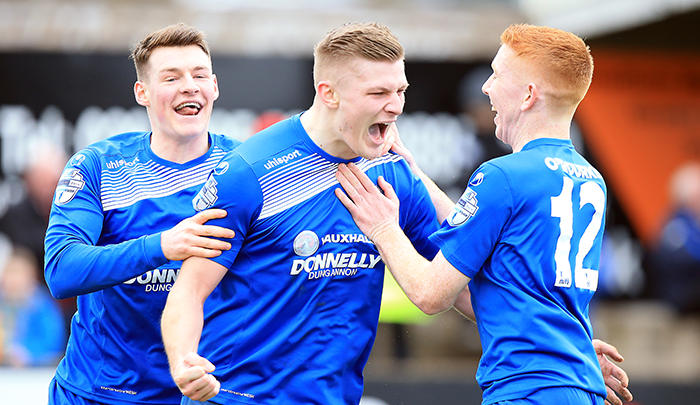 But cup football is always full of surprises – and tomorrow’s all-Premiership ties may not be as straightforward as some observers are forecasting.

First up, with a 3pm kick-off, is the meeting between Dungannon Swifts and Linfield at Mourneview Park in Lurgan.

Thoughts immediately turn to the 2006-07 final, Dungannon's sole appearance in the decider, which to date remains the only time the cup has ever been settled after a penalty shoot-out.

The Blues came out on top that day, albeit only just, but current Swifts boss Rodney McAree more than played his part, not only captaining the side but also scoring in normal time and in the shoot-out.

And he's relishing the chance to be involved in local football's blue riband event once more, while acknowledging the not insignificant hurdle his players have to clear first.

"It would be a dream from my point of view as manager of Dungannon Swifts, a club I've grown up at, to lead the side out at Windsor Park," he said.

"I was very fortunate to do it as a player. I think I would enjoy it more going as a manager but we have a huge obstacle to get over before we can even think of that.

"Is it one that we can win? We have to be positive and think we have a chance. We have to try to set ourselves up and cause them problems."

Linfield hold the advantage in head-to-head meetings between the sides this season, bagging four goals on their way to a win back in January and the same number before that in November.

But that will count for nothing as the Blues face a season-defining couple of weeks.

A win in tomorrow’s semi-final will bring David Healy's side one step closer to atoning for losing in last year's decider, but it also keeps alive hopes of what has appeared at times to be an unlikely treble.

The Co Antrim Shield is already safely tucked away in the club trophy cabinet and Linfield are also still very much in contention for Gibson Cup honours having snapped at Crusaders' heels all season.

They face the defending champions next weekend. A win will see the gap whittled down to a single point, so what better way to go into that game than on the back of booking a place in the Tennent's Irish Cup final?

And Linfield's form certainly suggests they can do it. Apart from a loss to Coleraine in early January they are undefeated in all competitions in a run stretching back to the middle of November, a sequence of some 18 wins, just two draws and that solitary defeat to the Bannsiders.

Later tomorrow afternoon all eyes will be on the Ballymena Showgrounds where cup holders Glenavon will continue their defence against the currently all-conquering Coleraine (kick-off 5.15).

The Lurgan Blues have become something of a tough nut to crack in recent years, having also lifted the trophy in 2014, and it's this association with the Irish Cup that boss Gary Hamilton will no doubt be hoping inspires his players to resurrect a campaign that perhaps hasn't panned out how anyone at Mourneview Park might have hoped.

A Charity Shield win over Crusaders to open the season hinted at big things to come but several significant periods without a win severely hindered any hopes of an oft mooted title challenge, with the Lurgan Blues effectively limping over the line to secure a top six spot.

Life has been better in the Irish Cup. Glenavon's run to the semi-finals has been relatively trouble-free although they did suffer a scare way back in the fifth round against Portstewart when Luke Bradley fired the Seahawks in front early on, but goals from Kris Lindsay, James Gray and Andrew McGrory soon saw the holders progress with ease.

A way past Armagh City was safely negotiated in the next round before a quarter-final clash with Portadown produced the most comprehensive victory to date, a thumping five-goal win over their near neighbours in their own backyard.

Coleraine will be an entirely different proposition, however. The Bannsiders are in the middle of an amazing run, stretching back to New Years' Eve, that has hoisted Oran Kearney's charges up to third in the table.

And given the fact this has been achieved by not only the most settled but youngest squad in the league simply underlines the remarkable work in progress on the Ballycastle Road.

In Jamie McGonigle the Bannsiders possess a potent threat up front. The 21-year-old has 17 goals to his credit this season, including a brace against Ballymena United in the last round.

Also grabbing a couple of goals that day was a certain Eoin Bradley, a man who simply loves the Irish Cup and indeed the Ballymena Showgrounds.

Not only did he pick up a winner’s medal last season with the Lurgan Blues but he has scored in each of his last four visits to Warden Street - regardless of what shirt he has been wearing! Could he be the key to loosen Glenavon's grip on the trophy?