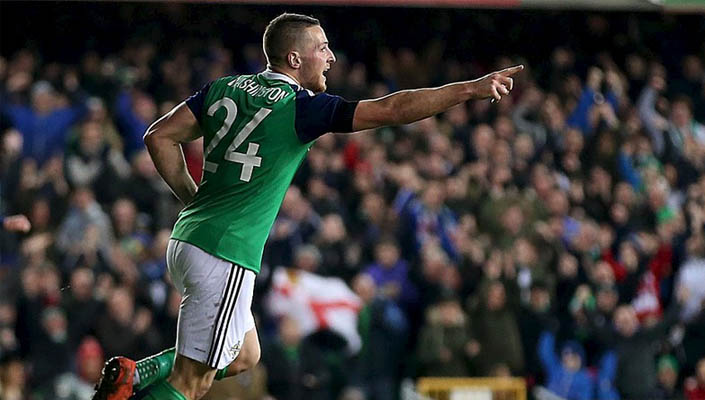 Northern Ireland welcome Norway to the National Football Stadium at Windsor Park this evening (26 March) as the FIFA 2018 World Cup qualifiers resume after the winter break.

Michael O’Neill’s side go into the game handily placed in second spot in Group C, while Norway have picked up just three points from their four outings to date, via an expected victory over San Marino in Oslo last October.

Indeed Norway’s poor start to the campaign prompted a managerial change last month with Lars Lagerbäck coming in to replace Per-Mathias Hogmo. Lagerbäck brings with him a rich pedigree, not least guiding Iceland to the quarter-finals at Euro 2016.

The 68-year-old Swede acknowledges his new charges need to hit the ground running if they are to salvage anything from the current campaign.

“For qualification the match means everything. There is almost no chance to reach the play-off if we lose the game, but we still have the possibility if we win,” he said.

Norway provided the opposition for Michael O’Neill’s first game in charge of Northern Ireland, winning 3-0 back in 2012, but since then the two nations have experienced vastly different fortunes.

O’Neill said: “I still remember that night. The scoreline was very harsh on us but we are a lot more developed now as a team. We are a lot stronger, mentally and physically, and in a better place than we were then.”

Fulham and former Celtic midfielder Stefan Johansen (26) dons the Norway captain’s armband for the first time this evening after being appointed by coach Lars Lagerbäck during the week, replacing the now retired Per Ciljan Skjelbred.

As well as Johansen the Norwegians have a strong GB-based contingent among their number, with four players who turn out in the Premier League making up the spine of the team.

A couple of them are at Hull City - Omar Elabdellaoui, and Adama Diomandé - while Håvard Nordtveit can be found in West Ham United’s colours. And striker Joshua King has been in a rich vein of form on England’s south coast with Bournemouth. He is also Norway’s leading scorer so far in the WC qualifying campaign, finding the net in the last two games against San Marino and the Czech Republic.

Fans attending the game at the National Football Stadium at Windsor Park may also witness the senior debut of the uncapped Sander Berge, a 19-year-old midfielder.

Lars Lagerback believes Berge could be a huge star in the future.

He said: “It’s very unusual to bring a 19-year-old into a national team. He has done fantastically well, and I’ve seen him in a lot of games now. We’ll see how he copes at this level against more experienced internationals. Short term and long term he is a very interesting player.”

Berge first came to notice with Vålerenga in the Tippeligaen, attracting a bid from Everton before making the move in January to Belgian top flight club KRC Genk. for whom he is already a first team regular.