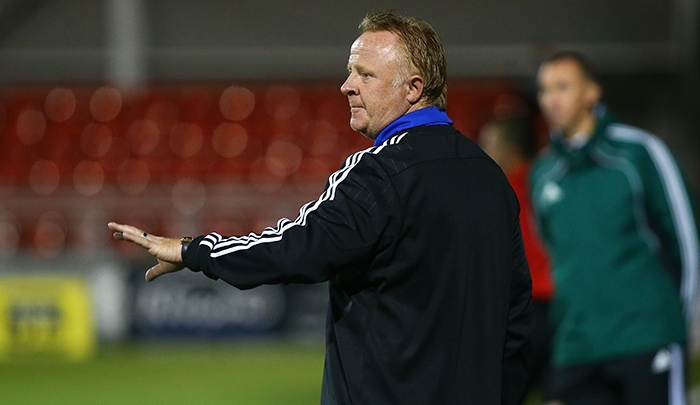 The Northern Ireland Under-18 development team narrowly lost the first of their two games against Denmark this week.

Last night’s match at Solitude ended 2-0 to the visitors but it was a pretty even contest.

After a nervous start the Northern Ireland team settled well and were largely in control before the Danes scored the opener on 20 minutes from a free-kick which squirmed under keeper Rory Brown’s body.

The goal lifted Denmark and they created a couple of chances, but Northern Ireland also had some decent efforts as half-time approached.

After the break the home side continued to compete well, however they fell behind further in the 60th minute when some poor defending allowed the Danes in to extend their lead.

Both sides carved out opportunities during the remainder of the game. And Northern Ireland had a couple of good efforts from long range.

Afterwards Northern Ireland U17s and U19s boss Stephen Frail said he was reasonably pleased with the team’s performance despite the final scoreline.

“There were some fine individual performances and very good passages of play. We created some good chances and had some decent efforts, mainly from long range. We’ll be positive going into the second game,” he pointed out.

The manager was particularly pleased with the performances of the three new faces in the squad - Daniel Ballard (Arsenal), Cameron Palmer (Rangers) and Kyle McDowell (Portsmouth).

The second game of the double header against Denmark takes place tomorrow (2 March) at Mill Meadow in Castledawson and it kicks off at 7.30pm. Entry to the match is free.

Cameron Palmer looks set to be rested for the game, while Reece McGinley will not feature due to injury. The manager is hoping Ethan Galbraith, who did not play at Solitude because he was carrying a knock, may get a run-out at some stage in the game tomorrow.