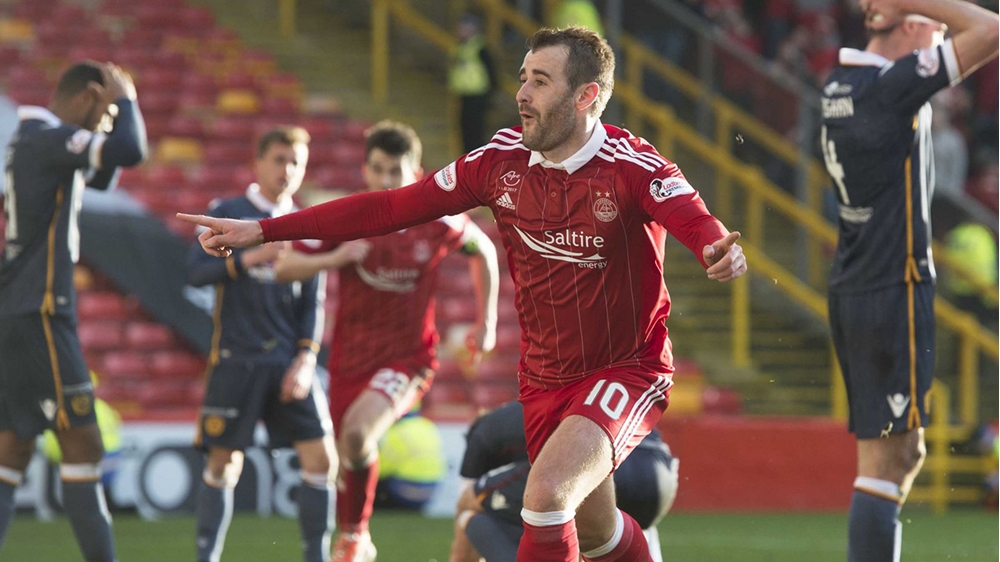 Aberdeen consolidated second place in the Scottish Premiership table after Niall McGinn struck in injury time to seal a 1-0 home victory over struggling Motherwell on Saturday.

The 29-year-old, who has now scored 13 goals in 40 appearances for the Dons this term, admitted that hitting the winner against Motherwell was a little bit special.

“If you go out and win the game four or five nil you’re delighted but to score a late winner it gives you that extra good feeling,” said the Northern Ireland winger.

“You could see when we scored the celebrations were halfway down the tunnel at one stage.

“I think it’s relief more than anything that we’ve got the three points but we deserved to win the game.”

Aberdeen’s victory over Motherwell, who have former Northern Ireland first-team coach Stephen Robinson in temporary charge, was their eighth successive home success in all competitions, the first time they have achieved this feat since the Alex Ferguson era.

“It is always nice to be part of these records,” added McGinn. “If we are a team doing well and winning games and breaking records then we will be happy. It is a good time to be playing at the club and we are enjoying our football.”

Also in the top flight in Scotland Liam Boyce remains two ahead of McGinn in the goalscoring stakes after he scored his 15th of the season in Ross County’s 2-1 home reverse to Kilmarnock.

Midfielder Paul Paton, who was last week called into the Northern Ireland squad for the crucial World Cup qualifier with Norway later this month, scored his first ever goal for Tommy Wright’s St Johnstone who defeated Dundee 2-0 at McDiarmid Park at the weekend.

In the FA Cup there will be no Northern Ireland representation in the semi-finals of this season’s competition after Shane Ferguson’s Millwall went down 6-0 to a clinical Spurs outfit at White Hart Lane yesterday.

Meanwhile, Lisburn teenager Ben Kennedy continues to enhance his growing reputation after he found the top corner with a stunning 20-yard strike to give Stevenage a 2-0 win at Luton Town with his ninth goal of the campaign.

After the game Stevenage boss Darren Sarll heaped praise on the 19-year-old and also that of his fellow team-mate and U21 international colleague Dale Gorman.

Sarll said: “Ben has to seriously be talked about in the same light as the other top players in this division. He is top, top class.

“His moment of quality was spectacular – he checked onto his weaker foot and smashed it into the top corner. I never want Ben to leave us as long as I’m manager.”

“When Dale (Gorman) came off the bench there was a little beam of pride from the technical area because Dale at right back and Ben ahead of him have been joined at the hip for five years now,” added Sarll.

“Everything great about Stevenage came out today – desire and determination – but also the two lads who came through the academy. Dale was magnificent too.”

Also in League Two Shay McCartan was on the scoresheet again with his fourth goal in six games as Accrington Stanley further eased their relegation worries with an impressive 2-0 success at play-off contenders Exeter City.

Finally, in what was a good weekend on the scoring front for Northern Ireland players, Ben Reeves took his tally for the season to nine when he grabbed an injury-time equaliser for MK Dons as they drew 2-2 at home to Rochdale in League One.