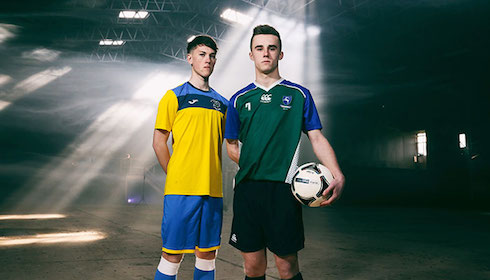 It will be the first time that the U18 final has been played on St Patrick’s Day and the game will be streamed live on the Irish FA YouTube channel, which you can watch here

Grosvenor Grammar are the current holders of the cup and eased through to the showpiece with an impressive 7-2 win over RBAI while St Columb’s College, who have teams in both the U16 and U18 finals, overcame Edmund Rice College 4-1 in their semi-final.

St Columb’s College coach, James Green, knows it will be a difficult task to snatch the trophy away from Grosvenor.

“We expect the Danske Bank Schools Cup final to be a tough game,” says James. “Having watched Grosvenor we know that they like to play possession football. However, we have worked extremely hard throughout the season and I have been pleased with the character and desire that my players have shown.

“We challenged this group from the start of the season to reach the first final to be played on St Patrick's day and to play a great brand of stylish football. We have done both of those things and now the players and staff can’t wait for the game.”

Darren Tomkins, Coach of Grosvenor Grammar, said: “We are delighted to have reached the final of the Danske Bank Schools Cup for a second consecutive season and are extremely eager to defend our trophy.

He continued: ”Our boys have excelled throughout the competition with their hard work, commitment and positive attitude. Led by their captain Stuart Nelson, they have represented their school with distinction.

“In reaching the final, they have beaten very capable teams, both in games at home and away. We look forward to competing with St Columb's in what should be a very good game.”

Admission to the final at Seaview is £2 for public and £1 for children.