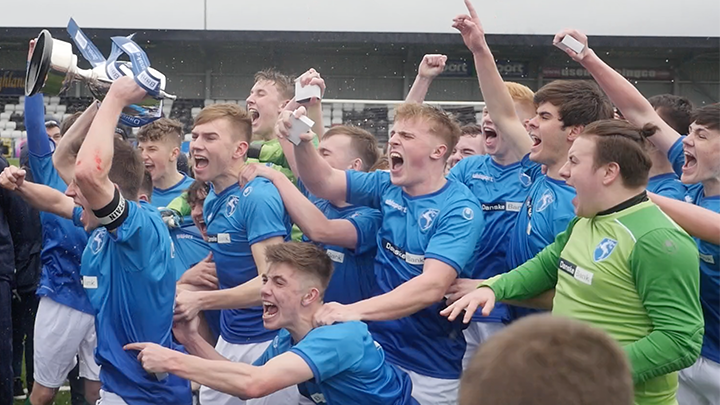 The east Belfast school’s direct approach proved more effective as they secured a 3-1 victory after extra-time over St Columb’s College at Seaview.

Their opponents from Derry-Londonderry enjoyed the bulk of the possession, and produced some scintillating football at times, but the Grosvenor attacking force of Stuart Nelson, Conor Kernohan and Josh Kelly ultimately made the difference.

The Grosvenor back four also played their part in the cup success, especially centre backs Lewis Cunningham and Daniel Larmour, who produced a series of fine tackles to repel the St Columb’s attack.

Afterwards Grosvenor head coach Darren Tomkins was full of praise for his side.

“St Columb’s were a very good side. We stuck at it well though and had good discipline and a good shape. We worked hard and the boys deserve an awful lot of credit. We are absolutely delighted to have won two in a row,” he said.

The first chance of the U18 final fell to Grosvenor’s Josh Kelly, who headed narrowly wide from a corner.

The St Columb’s midfield trio of Seamus Quinn, Malone and Nathan McEneff, along with Doherty and rampaging full-back Matthew Kirk, were imposing themselves on the game at this stage with some neat inter-play.

On 30 minutes impressive St Columb’s centre back Conal Fagan shot just over from the edge of the area and minutes later St Columb’s keeper Gareth Muldoon made a comfortable save from a Kelly snapshot.

Then Kirk found himself clear in the box for St Columb’s but he shot over the top and on the stroke of half-time Grosvenor midfielder Kurtis Elliott scooped an effort over the bar.

On 50 minutes the deadlock was broken. Kelly fed Nelson down the right and his deflected shot eventually fell into the path of Kernohan, who nodded home from close range.

The Derry side were level four minutes later, however. Doherty produced a superb defence-splitting pass to Joe McCartie who was upended by Grosvenor keeper Tim Larmour inside the penalty area as he raced towards goal. And Doherty stepped up to coolly slot home the spot kick.

With six minutes of normal time remaining Muldoon had to be at his sharpest to deny Grosvenor captain Nelson. Kernohan produced an incisive pass to send Nelson clear but Muldoon raced off his line to smother his effort.

In added time St Columb’s forced a series of corners. The Grosvenor defence stood firm, although St Columb’s sub Ciaran Deery had a half-chance which he scooped over the bar.

The Kelly-Kernohan-Nelson combo really came to the fore in extra time. In the first 10-minute period Kernohan picked out Kelly inside the box but he headed straight at the keeper.

That could have been a costly miss but Kelly made amends five minutes into the second period of extra time. Kernohan won the ball in midfield and slipped in Matt Tumilson who in turn found Kelly. The striker then evaded a challenge and rounded the St Columb’s keeper before neatly finishing from 10 yards to make it 2-1.

Three minutes later, and with just two minutes to go, Grosvenor made sure of victory. Kernohan, who was voted man of the match, produced another neat pass, this time to Nelson and the captain raced through to fire the ball past the onrushing Muldoon into the bottom corner of the net.