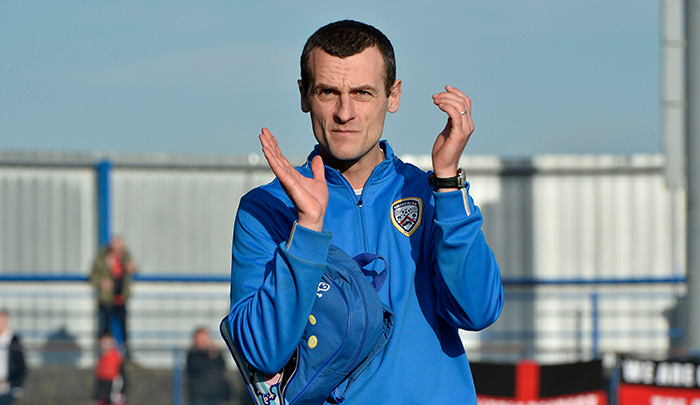 Coleraine boss Oran Kearney admits his side are “hungry” to reach the Tennent’s Irish Cup final this season.

The Bannsiders go in to their semi-final against Glenavon tomorrow (1 April) brimming with confidence after going 14 cup and league games unbeaten.

Kearney is pragmatic, however. He knows the game against the Lurgan Blues at Ballymena Showgrounds (5.15pm kick-off) represents a tough hurdle for his team.

“These days we are looking forward to every game and this one is no different. We have been enjoying a rich vein of form and we want to continue that in the Irish Cup semi-final. We want to get to the final,” he said.

But Kearney believes his charges will have to be at their best in Ballymena to progress in the cup because Glenavon will be desperate to retain the trophy they won in May 2016.

The Bannsiders, fresh from a 1-0 win over reigning champions Crusaders in the league last weekend, have a full squad available going into the game.

The manager pointed out: “We have a lot of experienced players as well as young players who are hungry and keen to do well.

“To get the win we will need a great team effort. We will need all compartments firing, not just one or two.”

Kearney further revealed there has been a big buzz about the game in Coleraine in recent weeks and he expects his side will be cheered on by a large travelling support in Ballymena tomorrow evening.