Everything you need to know ahead of Sunday's match 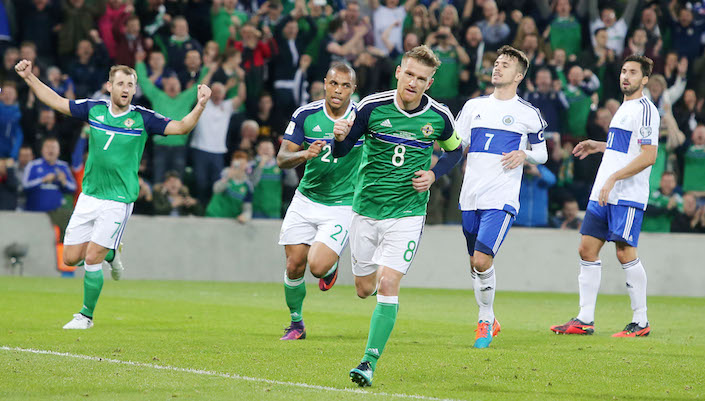 Sunday evening will see Northern Ireland take on Norway in their crucial Group C tie at the National Football Stadium at Windsor Park.

Sitting second in the group level on points with Azerbaijan, Michael O'Neill's men look to continue their great form in front of the GAWA in Belfast.

The latest edition of The 12th Man Guide outlines all the relevant information you need to know in advance of attending the match.

A few things to note are as follows:

Fan Zone - Everyone is welcome, even if you aren't attending the match, to the pre-match Family Fan Zone which will take place at Olympia Leisure Centre from 5pm-7pm.

Minute’s Applause - There will be a minute’s applause before kick off in memory of Derry City Captain Ryan McBride who died this week aged just 27.

 Sunday Game - The World Cup Qualifying match against Norway is being played on a Sunday. This has implications for our neighbours, both the local residents and the churches in our area. There are more than 20 churches within a square mile of the ground, some of whom have services when our game is being played. We would ask all fans to be mindful of this and as always, to respect the residents who live in the streets surrounding the National Football Stadium at Windsor Park.

JD Northern Ireland Supporters Store - Sunday’s game will see the opening of the new JD Store at the National Football Stadium at Windsor Park. It is located in the East Stand. It stocks Northern Ireland shirts, training gear and collect. It is also stocks an exclusive line of George Best memorabilia. It will be open on match day from 11:00-15:00 and then 18:15-22:00. Please note, for this game it will not be possible to access the store from the North Stand.

Kiosks - Our new concession units will be open on Sunday. There are 12 of these in operation around the ground with snacks and drinks available to purchase. Alcohol will only be sold up until kick off and it will not be possible to take alcohol into the stadium bowl. Alcohol will not be available in the East Stand as it houses our family area, although soft drinks and snacks will be available.