Tickets go on sale for UEFA Women's Under 19 Championship 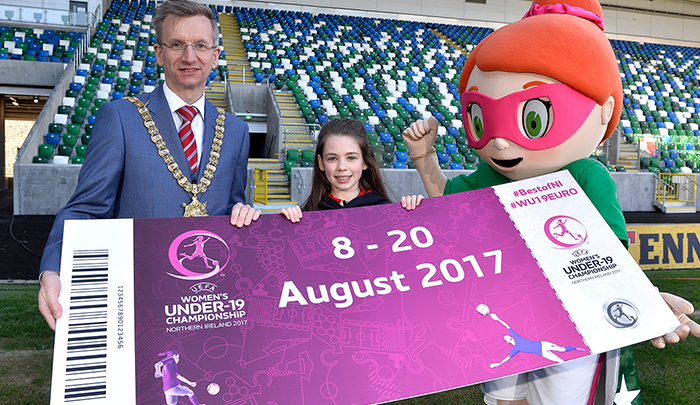 To celebrate International Women’s Day, tickets have gone on sale for this summer’s UEFA Women’s Under 19 Championship which is being staged in Northern Ireland for the first time.

The tournament kicks off on 8th August and runs until 20th and will be staged at the National Football Stadium at Windsor Park, Mourneview Park Lurgan, Ballymena Showgrounds and Shamrock Park, Portadown.

Tickets are available for the opening ceremony at the National Football Stadium at Windsor Park, all Northern Ireland matches as well as the semi-finals and final and can be bought now via Ticketmaster.

“At the Irish FA we believe in ‘football for all’ and this summer’s tournament will be hugely significant for women’s football in Northern Ireland. With it being International Women’s Day it was brilliant to put tickets on sale today and I hope that the UEFA Women’s Under 19 Championship will help inspire young girls and boys across Northern Ireland to play the game and to dream of wearing the green shirt.”

Meanwhile, the the official mascot for this summer’s UEFA Women's Under 19 Championship, Sweet Caroline, is launching a bid to break the World Record for the most penalties scored by a mascot in one minute.  Sweet Caroline will be out on tour across Northern Ireland schools for 10 days from 27th March, drumming up support for her bid and encouraging school children and their families to support the UEFA Women’s Under 19 Championship.

The World Record attempt will take place at the UEFA Women’s Under 19’s Championships Opening Ceremony on 8th August at the National Football Stadium at Windsor Park, tickets to which are available from today.

The record currently sits at 16 goals in one minute by a team of mascots so Sweet Caroline is calling all mascots across the country to get in touch and help her break the record.  Whilst out on tour Sweet Caroline will be practising her penalties with primary schools throughout Northern Ireland, on a 10 day mascot tour to help get her into shape and raise awareness of the Championship.

Helping Sweet Caroline launch her World Record bid today is Eadie Fallis who won the competition to design Sweet Caroline herself from over 3,500 entries from Primary Schools across the country.  Eadie was joined at the launch by her classmates from Enniskillen Royal who were treated to a VIP day at the new National Football Stadium at Windsor Park.

Tournament Director Sara Booth continued: “The Mascot Tour is designed to raise awareness of the upcoming UEFA Women’s Under 19 Championship and encourage children and families from across Northern Ireland to get involved.  The tournament is a huge opportunity to grow women’s football on a global stage and we hope our fans will come out in their masses to show their support and genuine love of football.”

For all the information on the upcoming Mascot Tour visit www.irishfa.com/uefawu19