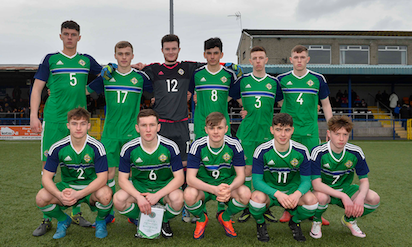 Northern Ireland will travel to England on Friday 24th March for their second Centenary Shield game after a disappointing final 10 minutes against Republic of Ireland in their opening match of the tournament.

Northern Ireland go into the game at Torquay needing a win to kick-start their campaign and manager Frankie Wilson is looking forward to the challenge;

“I'm looking forward to the game. We go into the match in Torquay as underdogs as England had a fantastic win in Scotland.

"All the scouting reports concur that the English boys are a well organised and talented group.  We go into the game after a disappointing result against the Republic. A game we should have won.

"Our training has gone to plan and we have a full squad to pick from. Bobby Burns will captain the side and we hope he takes his club Knockbreda scoring form into the game.

"Motivation will not be an issue, the staff and the players will relish playing against the English.

"I think after watching the Ireland v England rugby game on Saturday it helped us all believe that by using team unity and collective responsibility a win is achievable. Never write off the underdog.”