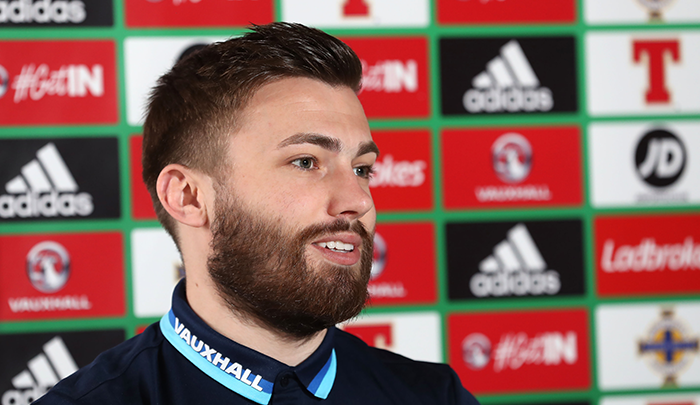 The Northern Ireland players are raring to go against Norway, according to Stuart Dallas.

The attacking midfielder says his team-mates are “chomping at the bit” and looking forward to Sunday’s World Cup qualifier against the Norwegians in Belfast.

Dallas, who has not played for his country since the San Marino game back in October due to injury, is delighted to be back in the fold and in a squad oozing with confidence.

He said: “It has been a good start for us (to the World Cup qualifiers). We set ourselves a points target at the start of the campaign and we are on course to meet that target.

“We are a group of lads who just want to win and want to be successful. We know how good we are and we know what we want to achieve. Hopefully we can go on to bigger and better things.”

The midfielder acknowledged the Green and White Army’s expectations are high, especially given the team’s recent home form, and said this was an indication of how the team have progressed in recent years.

But he insisted: “Expecting to win and winning are two different things. We have got to show the opposition respect. There are no easy games at international level.

“People are expecting us to get three points, but it will be a tough game. We are under no illusions about how tough it is going to be. They have a new manager and new players in their squad who will have a point to prove.”

However, Dallas is adamant Northern Ireland are in good shape going in to the game at the National Football Stadium at Windsor Park (7.45pm start).

He said: “First and foremost you have to win your home games and take it from there. We will just keep doing what we are good at and will prepare the right way.”

The Leeds midfielder said Northern Ireland will always “give a good account of ourselves and not just roll over” against any visiting opposition.

Dallas has never tasted defeat in a Northern Ireland shirt in a competitive game at the National Football Stadium and he would like to keep that run going.

He added: “We are confident and can’t see us getting beaten or putting in a bad performance at home. No matter who we play against we keep going right to the death.”