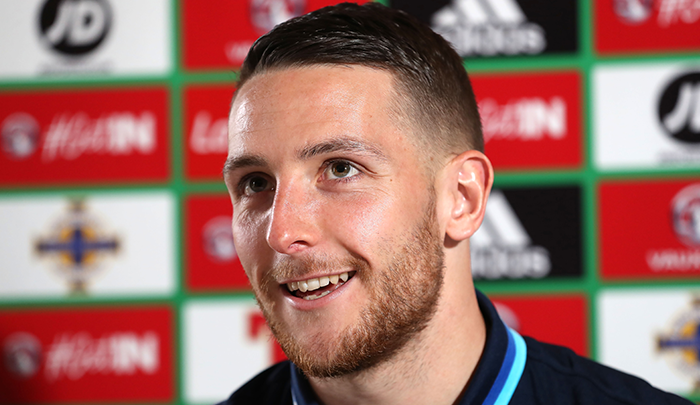 The 24-year-old frontman goes into the World Cup qualifier against Norway in fine fettle after a string of strong performances for Queens Park Rangers.

“It’s the first time in a while that I have played quite a bit of football coming in to an international break and I’m feeling sharp,” he said.

Washington, who has scored four goals for QPR in his past 10 games, has flourished since Ian Holloway took over the reins at the Championship club back in November.

He admitted he would love to score a few more goals for Northern Ireland and revealed he loves playing in front of the Green and White Army in Belfast.

“I really look forward to playing games at the National Football Stadium. It’s a brilliant atmosphere and sends shivers down your spine,” he said.

“I still have to pinch myself about getting to play international football. I savour every moment.”

Washington, who made his debut for Northern Ireland against Wales just over a year ago, also pointed out: “‘This is a big game. Norway are going to want to get on some sort of run to steal our spot essentially. It’s really important that at home we put down a marker.”

The striker says Northern Ireland now have six or seven players who can score goals and he feels competition for places up front is good for the team.

He also believes he is better technically than a year ago given the experiences he has had since first pulling on a Northern Ireland shirt.

Washington further revealed that international football was a saviour for him when he was struggling to make an impact at QPR under previous boss Jimmy Floyd Hasselbaink, who often had him operating on the wings or ploughing a lone furrow up top, neither of which suited his all-action style.

Holloway, by contrast, is letting him play up front in the striker role and he is loving it.

He also revealed that on arrival at the club Holloway got his backroom staff to put together a video clip of his goals, including his two for Northern Ireland, to help him get his confidence back. “The videos reminded me that I was good enough to play at international level,” he said.

The forward feels it is important to have a good relationship with managers and he says he has that with both Michael O’Neill and Ian Holloway.

He said both bosses have been encouraging him to be aggressive, hungry and desperate to score goals – just like he was when he first got into the Northern Ireland squad.

And, after a year of highs and lows, he firmly believes he is back in the groove now – and hopefully Norway will feel the full force of Washington power.