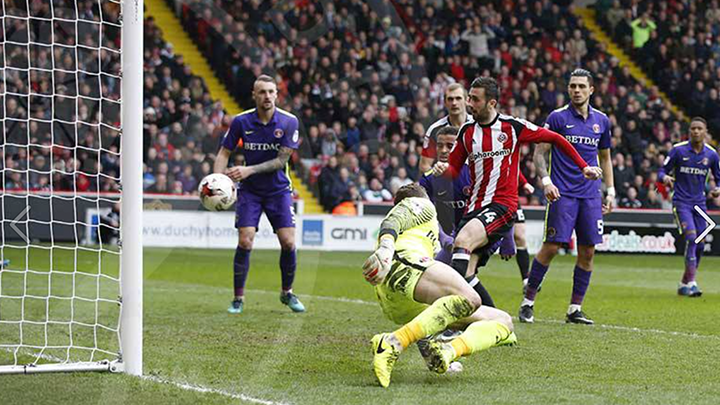 Defender Daniel Lafferty secured another three points for Sheffield United when he scored a second-half winner in the Blades 2-1 success over Charlton Athletic at Bramall Lane at the weekend.

The 27-year-old, who struck his third goal of the season just three minutes after the break, has been a regular in the Sheffield United side this term and was named on the standby list last week by international boss Michael O’Neill for the forthcoming World Cup qualifier with Norway this Sunday.

O’Neill said: “With Daniel doing as well as he is and Sheffield United going well in their league, I didn’t think it was right to name him in the squad, but he is on standby.

“Depending on what happens between now and when the squad meet up, we’ll see if he is an option for us.”

Northern Ireland’s West Brom trio of Jonny Evans, Gareth McAuley and Chris Brunt will certainly be on a high when they link up with the rest of the squad today in Belfast following the Baggies superb 3-1 victory over Arsene Wenger’s Arsenal on Saturday.

Evans was majestic at the heart of West Brom’s defence and admits the team were fired up for the visit of the Gunners following recent criticism following defeats at Crystal Palace and Everton.

“We knew people were questioning us and people would be throwing out ‘they’ve slackened off since they got to 40 points’, ‘they’re on the beach’ and all that nonsense,” said Evans.

“The Palace one was a bad result - then you go away to Everton, who are a very good side with the manager saying we didn’t deserve to be 2-0 down at half-time after our performance.

“But we’ve worked hard all week and it was important to put it right against Arsenal today.”

Elsewhere, defender Craig Cathcart and skipper Steven Davis both played the full ninety minutes in the Premier League for Watford and Southampton respectively while Michael McGovern kept a clean sheet for Norwich who defeated Barnsley 2-0 in Championship.

In the Championship, Conor Washington, Stuart Dallas and Oliver Norwood all got some game time as substitutes, while uncapped defender Tom Flanagan did play the whole of Burton Albion’s amazing 5-3 defeat at home to Brentford.

And in Scotland Aaron Hughes returned to the Hearts squad that lost 2-0 at Aberdeen for whom in-form Niall McGinn chalked up yet another assist!