Striker Shayne Lavery’s clinical first half finish was enough to seal all three points for Blackpool who defeated Barnsley 1-0 at Bloomfield Road at the weekend.

The former Linfield striker has now scored five goals in 11 games since his move from Windsor Park in the summer and Tangerines boss Neil Critchley was full of praise for the 22-year-old’s performance in the EFL Championship encounter.

Shayne’s a real handful for players in this division and he did really well today, as did the whole team

“I thought Shayne’s overall performance was fantastic,” Critchley told the club’s website. “He could have scored earlier on as well, but he had several chances throughout the match.

“He’s always in those right positions, and he anticipates the move of the ball so well. Shayne’s a real handful for players in this division and he did really well today, as did the whole team. It was a big three points for us.”

Meanwhile, Northern Ireland Under-21 striker Paddy Lane came off the bench to score his first goal for Fleetwood Town and earn them a point in their 2-2 draw at Cambridge United.

The 20-year-old, who only joined the League One side in the summer from non-league Hyde United, picked up a pass from Callum Camps to hit a wonder goal with just 14 minutes left on the clock.

Describing his goal, Lane said: “So I’ve just got the ball, I’ve cut in, he’s given me the inside and I’ve hit it and the next minute I know I turn round and I just see our bench going crazy.”

Another Under-21 international, Belfast-born Chris Conn Clarke, came on to make his debut for Fleetwood Town on Saturday and Lane was delighted to have his close friend on the pitch when he scored.

“Me and Cricky [Chris Conn-Clarke] are like best mates since I’ve been at the club,” added Lane. “We’re so close and it’s one of those where I’ve scored and at that moment I’ve thought Cricky is on as well here, ‘where’s Cricky?’.

“I’ve been looking around for him. It’s brilliant for him to make his debut. I see him every day in training and I know what a good player he is.”

In fact it was a good weekend for Northern Ireland players on the goalscoring front: Liam Boyce converted from the penalty spot to record his ninth goal of the season with fellow international Michael Smith marking his return from injury with a sensational strike as Hearts won 3-0 at home to Livingston in the Scottish Premiership. 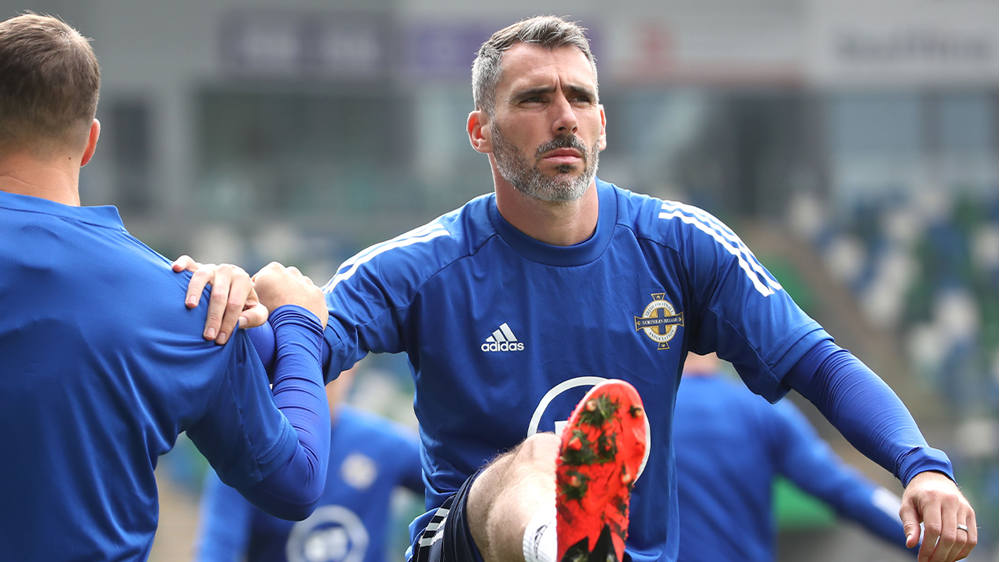 In EFL League One Carl Winchester, who has been playing at right back this season, scored the only goal of the game and his third of the season in Sunderland’s win at the Stadium of Light over Bolton Wanderers, while Matty Lund was among the goals as Salford City drew 2-2 at home to Northampton in League Two.

Northern Ireland vice-captain Jonny Evans was an unused substitute as Leicester City were held to a 2-2 draw at home by Burnley in the Premier League as was Jamal Lewis in Newcastle United’s draw at Watford. Defender Craig Cathcart started for the Hornets in that game, while Stuart Dallas played his customary 90 minutes for Leeds United who lost 2-1 at home to West Ham.

On the injury front Paddy McNair and Shane Ferguson both returned to action with Middlesbrough and Rotherham United respectively, but Josh Magennis was absent from Hull City’s side with a hip complaint and Conor Washington failed a late fitness test on his ankle.

After her exertions with Kenny Shiels’ Northern Ireland team last week Rachel Furness was an unused substitute for Liverpool Women on Sunday, however Demi Vance was part of the Rangers team that maintained their 100 per cent league record with a 3-0 win over Hearts.

In the U23 Premier League Charlie Allen scored for Leeds United in their thrilling 4-4 draw at home to Blackburn Rovers and Jacson Coppack found the net in Burnley U18s' 3-0 victory over Nottingham Forest.

Finally, there were assists for Doncaster Rovers midfielder Ethan Galbraith in a 2-1 defeat to Plymouth Argyle and Southampton Women's Ciara Watling as the Saints won their National League game 5-0 against London Bees.