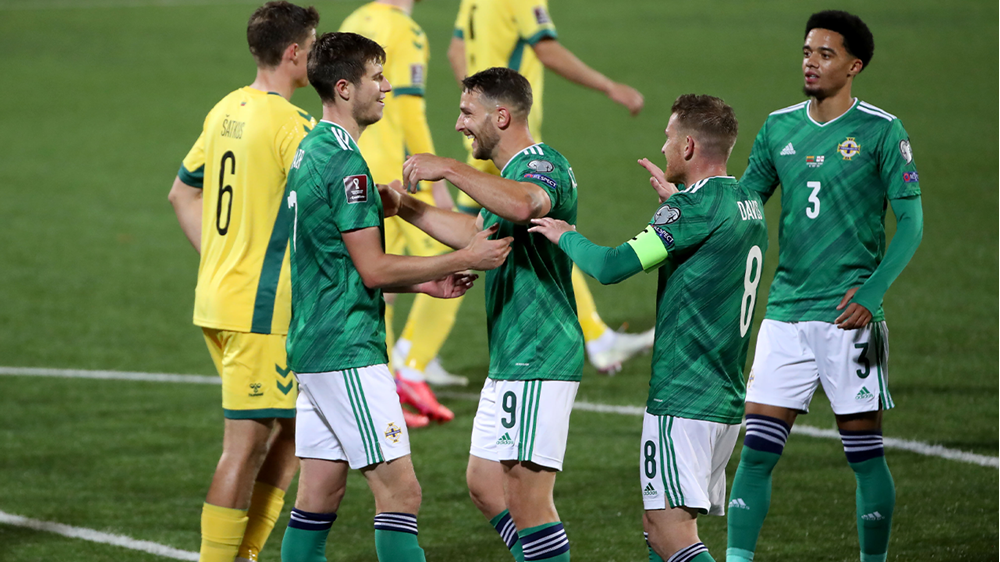 Northern Ireland powered to a fine win against Lithuania in Vilnius tonight thanks to open play goals from Daniel Ballard and Shayne Lavery and penalties expertly converted by Conor Washington and Paddy McNair.

The World Cup qualifier in the Lithuanian capital ended 4-1, however Northern Ireland goalkeeper Bailey Peacock-Farrell produced a great penalty save to keep his team in front when the scoreline read 2-1. It was an important stop.

In the end though Ian Baraclough’s boys fully deserved the victory against the lowest ranked side in Group C of the European qualifiers for FIFA World Cup Qatar 2022.

In the early exchanges Lithuania forward Edgaras Dubickas shot over the top, while Lavery just failed to make a decent connection with a fine Jamal Lewis delivery into the box and the ball squirmed wide.

Northern Ireland captain Steven Davis, who played superbly across the 90-plus minutes, lofted a lovely pass to Washington inside the area, however the ball was nicked off his toes and cleared for a corner.

Baraclough’s charges took the lead from the subsequent corner. It was taken by Jordan Thompson down the left and eventually the ball was fed to Washington down the right by Davis. The striker fired the ball across the box to the back post where Ballard was on hand to steer the ball home from close range for his first senior international goal.

Following the opener, which came in the 20th minute, Ali McCann produced a decent long range effort which was tipped around the post by Lithuania keeper and captain Ernestas Setkus.

Northern Ireland, despite being without experienced players like Jonny and Corry Evans, Stuart Dallas and Josh Magennis, stroked the ball around confidently throughout the first half. They constantly tried to push forward but chances were few and far between.

Lithuania rarely threatened, although on the half-hour mark Dubickas fired a shot wide.

A quick breakaway as half-time approached saw Washington clip the ball through to fellow frontman Lavery, who raced towards goal. He lifted his shot over the bar, however.

The penalty was awarded by French referee Stephanie Frappart when Lithuania midfielder Linas Megelaitis blocked a Michael Smith cross with his hands inside the area and Washington stepped up to smash the ball into the bottom corner. It was a great hit.

Lithuania immediately went on the attack and defender Rolandas Baravykas had a powerful drive deflected wide for a corner.

However, he made no mistake when the ball arrived at his feet again from the corner. He hammered the ball into the top corner from 16 yards to make it 2-1.

The spot kick was awarded when McNair collided with Justas Lasickas inside the area after Craig Cathcart was caught on the ball. Following a VAR check the penalty was given and McNair was booked.

Arvydas Novikovas, who had previously scored 12 times for his country in 70 appearances, stepped up to take it but Peacock-Farrell was equal to his effort, pushing the ball away down to his left.

That huge let-off sparked Northern Ireland into life and they extended their lead four minutes later when Lewis and Thompson combined down the left and the midfielder drilled in a cross which was smashed into the net by Lavery. And it was also his first senior international goal.

Northern Ireland were awarded another penalty on 80 minutes and it was again scored with some panache, however this time it was McNair who provided the precision finish to put his team 4-1 up at the 5000-capacity LFF Stadionas.

Northern Ireland’s first victory in Group C now sets things up nicely for the WCQ against Switzerland next Wednesday (8 September) when 16,000 fans will be roaring them on at the National Football Stadium at Windsor Park.