Bringing new-found colour to south Belfast, the ‘Football Art and Memories’ street art initiative pays tribute to Northern Ireland and Linfield footballing greats as well as the magic moments that have played out on the famous Windsor Park pitch.

The location, next to the stadium, has attracted anti-social behaviour and graffiti in the past, but the re-imaging regeneration project has resulted in the installation of 10 street art images illustrating the power of football in bringing people together in Northern Ireland – and there’s more to come.

Irish FA Community Relations Officer Chris Wright said the foundation was proud to lead on the community regeneration art project at a stadium that has hosted so many historic events.

He said to immortalise and celebrate just some of those great occasions through the art storyboards “brings a real joy, not only visually to the surrounding areas but also to the local community”.

He explained engaging with GVRT and local schoolchildren was vital to give the community ownership over the project, with some wonderful drawings highlighting the passion for football in the area. 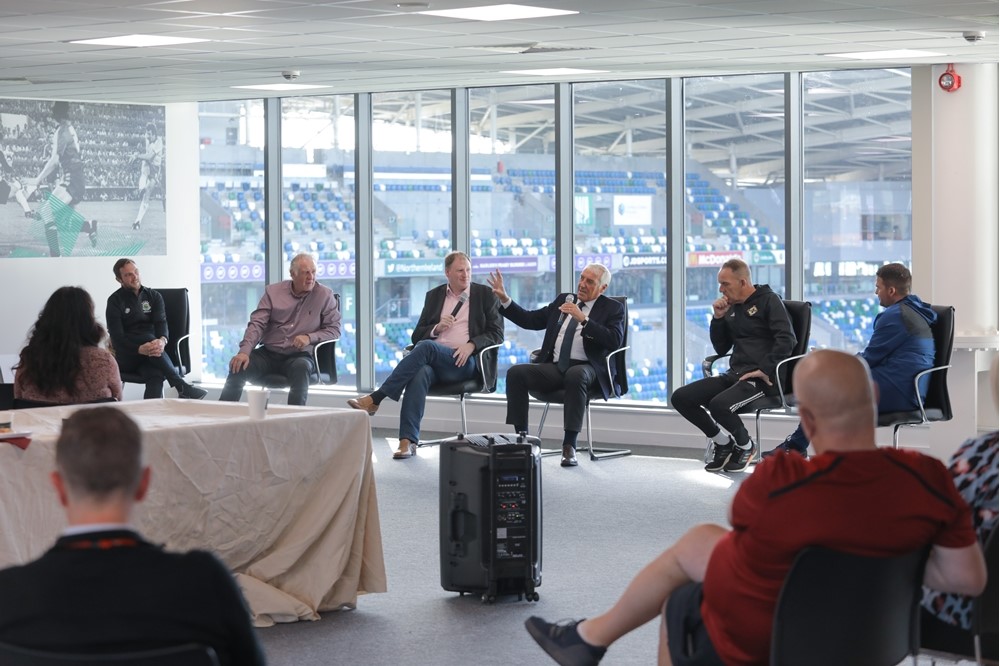 Chris Wright further revealed: “This is the first stage of a multi-phase project and we look forward to continuing to engage with the community and to celebrate Irish FA events at the stadium through street art, none more so than last week’s senior women’s international game, which we have already confirmed as our next storyboard to be erected.”

Linfield general manager Pat Fenlon said: "Linfield FC are delighted to see this project come to fruition. The artwork improves the area, and I am sure that any visitors will be impressed with the standard of the work.”

Residents living near the stadium played an important role in the project. Angela Johnston, Fit & Well Manager at Greater Village Regeneration Trust, said it was happy to have been involved in the project from its inception.

“We serve the Greater Village area just beyond the gates of Windsor Park, where residents have a great affinity with local team Linfield and the national teams,” she pointed out.

“Our role in this project was to create the community links which are vitally important in the rich history of Windsor. We involved local children in creating some of the art as part of the installation to create a cohesive and inclusive piece that the community can be proud of.”

Reflecting on the fan-driven scheme, Gary McAllister, chairman of the Amalgamation of Official Northern Ireland Supporters’ Clubs, said: "I'm really pleased to see this project come to fruition and hope that other fans will smile when they see the featured images, which celebrate some of the most memorable Northern Ireland home victories.

“I'd like to thank our partners in the project steering group - Linfield Supporters Trust, Greater Village Regeneration Trust and the Irish FA Foundation - for their contribution in what has been a real team effort."

The street art initiative is one component of a wider Good Relations project being delivered by the Irish FA Foundation which is funded by The Executive Office and other partners, including Community Relations Council, Stadium Community Benefits Initiative, Belfast City Council and the Department for Communities.