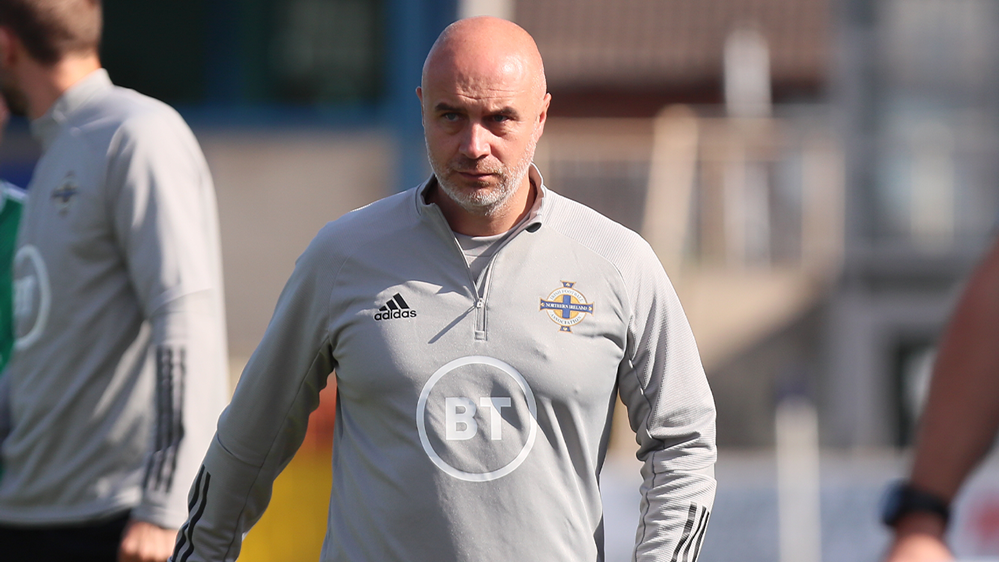 Northern Ireland’s Under-17 men’s team continued their preparations for Euro qualifiers next month with a friendly against a Dundalk Select which ended 1-1.

Gerard Lyttle’s side looked all set to win the encounter at Oriel Park yesterday through an Omari Kellyman goal but Dundalk netted in the last minute to secure the draw.

Northern Ireland pressed high and threatened in the early stages of the game. A fine Joel Thompson cross was cleared by the home defence.

Then Daithi McCallion played a lovely crossfield pass which was met by Kellyman, however he could only guide his header over the top.

Dundalk’s first attack came after 11 minutes. It was a tame effort that was easily gathered by Northern Ireland keeper Pierce Charles.

Lyttle’s charges threatened through Kellyman again, who beat the keeper to a through ball but was forced wide by the defence. He still managed to slip the ball to fellow striker Sam Glenfield who shot over the bar. Then a well worked corner found Kellyman free at the back post. Again though his header went over the top.

On 37 minutes Dundalk looked to counter quickly, however McCallion did well to intercept the ball on the edge of the box.

Northern Ireland produced a slick move involving Leon Boyd down the left. His delivery into the area found the tireless Glenfield, who cleverly nipped in front of his marker at the front post before flicking a shot just wide of the target.

Just before the break Kellyman’s deflected shot fell to Sean Brown who steered an effort inches past the post.

Charles made way for Kai McLean at half-time, while on 55 minutes Boyd, Thompson and Rio Morgan were replaced by Luca Doherty, Shea Brennan and Bobby Jack McAleese.

The second half continued with Northern Ireland having the bulk of the possession. Kellyman made another good run but fired a long range shot over the top.

However, the lively Kellyman was not to be denied and he opened the scoring with a neat finish. He ran at the home defence from deep before unleashing a powerful shot from 20 yards into the bottom corner.

Dundalk started to threaten again on 78 minutes with a free header that was turned over.

Lyttle made his final changes when McCallion and Glenfield were replaced by Kielan Reid and Corey Smith.

McCart got on the end of a Brennan corner but could only direct his header over the bar.

Dundalk pressed in the latter stages of the game and equalised two minutes into added time with a strike into the roof of the net.

In the UEFA Under-17 Euros preliminary round next month the boys in green and white will face Italy, Scotland and Albania (Group 12). And Northern Ireland will be hosting the mini tournament from 27 October to 2 November, although match venues have still to be finalised.