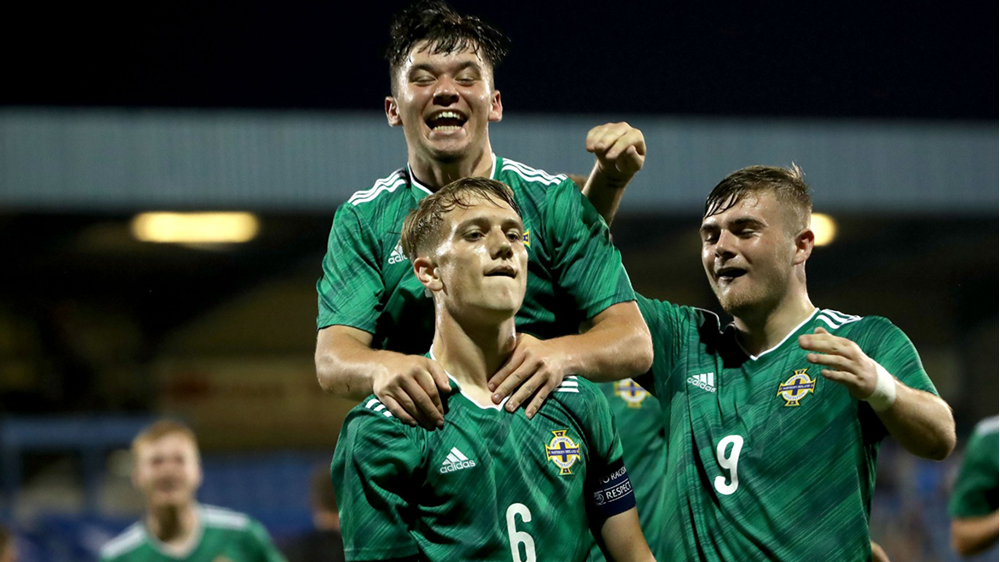 A penalty from captain Ethan Galbraith was enough for the U21s to take all three points from a rugged encounter at Mourneview Park played in front of 400 fans.

It was Northern Ireland’s second match in Group C of the UEFA U21 Euro 2023 qualifiers. Their first tie ended in a disappointing defeat away to Malta, however tonight’s display will certainly have pleased the new manager. 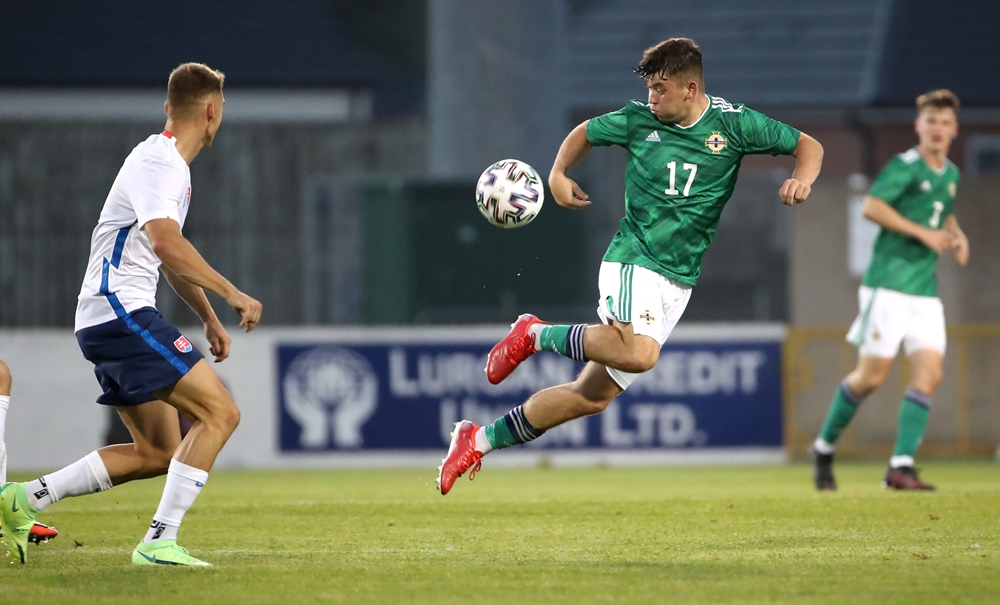 And their endeavour and fine approach play was rewarded when Galbraith smashed home the penalty nine minutes after the break.

Matej Trusa, who scored from the penalty spot for the Slovakians in their win over Lithuania in their first Group C qualifier, looked dangerous from the start. He put a header inches past the post early on and then Northern Ireland keeper Liam Hughes did well to push his stinging effort past the post.

Northern Ireland’s first chance of the game saw Slovakia goalkeeper Ivan Krajcirik dive at full stretch to push away a looping effort from Jack Scott which deflected off a Slovakian defender.

Wing back Peter Kovacik shot wide before, on 18 minutes, Slovakian frontman Roland Galcik hit a thunderbolt of a free-kick which Hughes tipped on to the bar. It was a super save.

As the half wore on Schofield’s side enjoyed a spell of pressure with Trai Hume putting in a couple of decent crosses. 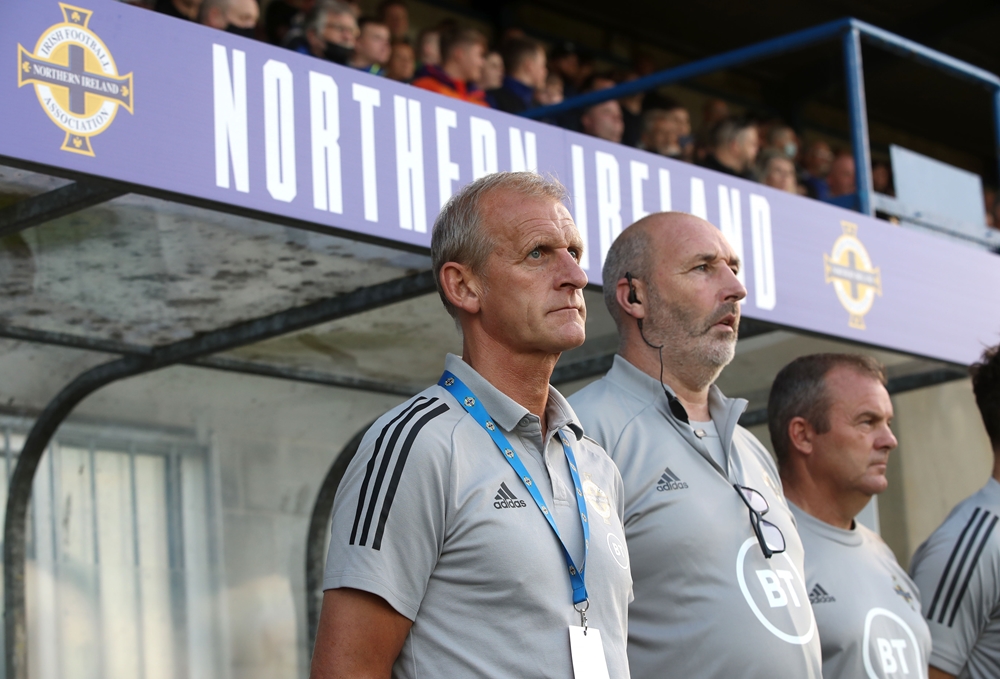 The best tackle of the game came from Galbraith. As Roland Galcik broke down the left the midfielder ran 30 yards and then dispossessed him with a perfectly executed slide tackle.

Slovakia attacking midfielder Miroslav Gono twisted and turned inside the area before firing in a low drive which Hughes clung on to.

Towards the end of the half a looping header from Aaron Donnelly bounced off the top of the bar.

Just after the restart the lively Christopher Conn-Clarke clipped in a shot which was comfortably collected by Krajcirik, and he also dealt with a speculative effort from Aaron Donnelly. Paddy Lane then headed over the top as the referee blew for an infringement.

On 54 minutes Northern Ireland took the lead from the spot. The penalty was awarded when Trusa bundled over Donnelly as Galbraith delivered a corner. The captain duly stepped up and smashed the ball into the bottom corner.

The home side continued to press and Caolan Boyd-Munce played a super cross-field pass towards Hume whose looping header at the back post was pushed away by Krajcirik.

Conn-Clarke fired in a free-kick which was met by Sam McClelland, however his header was straight at the keeper.

Conn-Clarke then jinked his way past a couple of defenders close to the halfway line before going on a mazy run which ended with him firing over the top from 25 yards.

The Slovakians conjured up a chance which saw captain Peter Pokorny’s deflected shot fizz past the post.

As the game opened up towards the end Ryan Waide just failed to connect with a low cross six yards from goal, while McClelland made a great last ditch tackle to thwart the Slovakians.

On 80 minutes Conn-Clarke sped forward once again and his crisp low drive was pushed away by Krajcirik as the ball look destined to nestle in the bottom corner.

Kofi Balmer produced an excellent defensive header to keep the visitors at bay and then, with minutes remaining, Slovakia substitute Jan Bernat skied a shot when well placed. 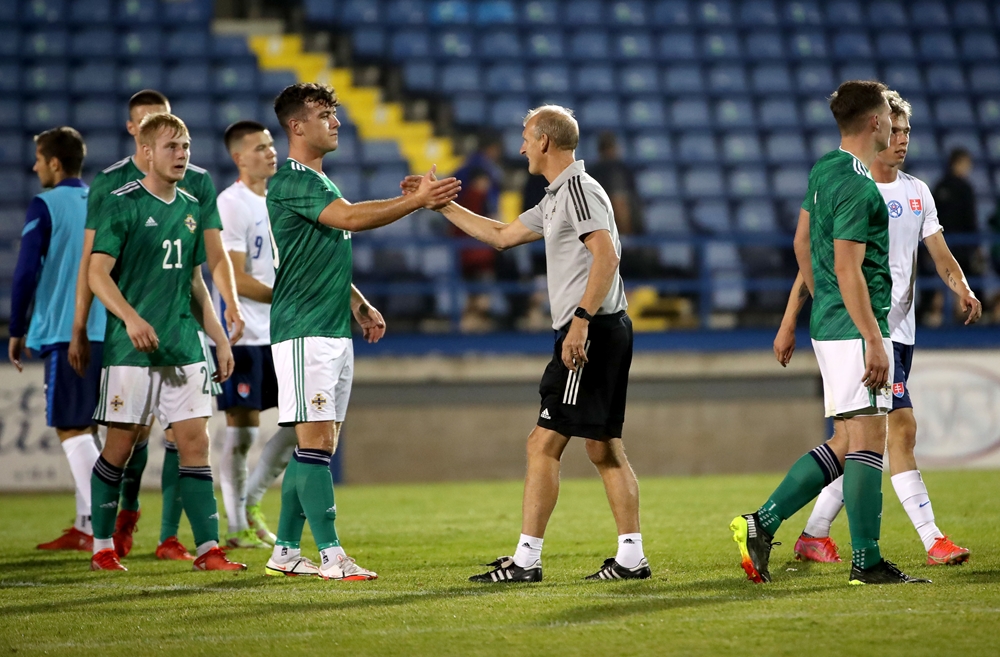 As full-time approached Conn-Clarke was flying forward once again, however his shot drifted well over the bar.

Down the other end a Matus Vojtko piledriver was deflected wide and that was the last meaningful action of the game.