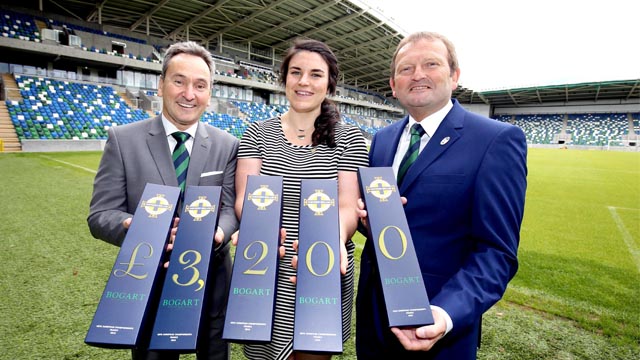 A cancer charity has benefited from the sale of a number of limited edition Northern Ireland team ties thanks to a donation from Bogart, the Irish FA’s official suit partner.

The Belfast menswear retailer has presented £3,200 to Cancer Fund for Children following the sale of the silk ties which were worn by the Northern Ireland players and officials during their memorable Euro 2016 campaign in France.

A percentage of the sale of the green and navy ties, which are embossed with the Irish FA logo, went to the charity which helps provide practical, emotional and financial support to children and young people affected by cancer.

“It was fantastic to see the country getting behind the Northern Ireland team in France and this was reflected in the huge interest from the public in buying the ties. The players and manager really did look first class in the suits, and it was a pleasure to be associated with such an historic sporting adventure.”

The tie forms part of a bespoke suit designed and produced by Bogart in partnership with menswear fashion brand Herbie Frogg.

Irish FA President David Martin, who attended the cheque presentation, said it was great to see the tie-up between the retailer and the association boosting the charity’s coffers.

“The support we’ve received from the Green and White Army will mean that we can continue to support hundreds of local families, helping them to come to terms with a cancer diagnosis, and provide them with emotional support throughout their cancer journey.”

A family-run business, Bogart is headed up by Newry man John Keenan, who works alongside his sons Gary, Mark and Neil.