Boys across the water - August 22 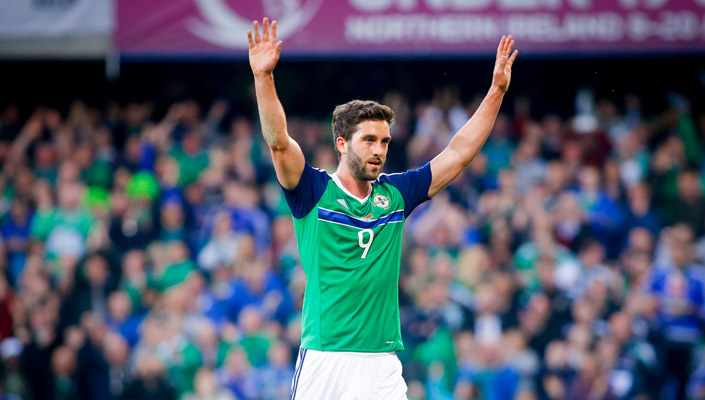 WILL Grigg’s sensational start to the new campaign continued after he scored twice in Wigan Athletics’ narrow 4-3 defeat at Nottingham Forest in the Championship at the weekend.

The 25 year-old striker, who bagged 28 goals for the Latics last term, now has four in five games this season and his performance at the City Ground earned him high praise from his team-mate Michael Jacobs.

“I think Will is exceptional,” said the midfielder, “He plays up there on his own now and manipulates two defenders, you know the positions he is going to get in and if you put the ball on the money for him then he will score.

“Whatever division he is in, he will score goals and he’s showing that despite a blighted pre-season he can score goals and start the season in red hot form, long may that continue.”

Another in-form Northern Ireland striker is Liam Boyce who took his tally to five in just two games after scoring both the goals in Ross County’s home success over Kilmarnock in the Scottish Premiership.

“When he does things sharp, Liam Boyce is a real handful,” said County boss Jim McIntyre. “The wide players are giving him a lot of service at the moment. I’m sure he’d be the first to acknowledge that.

“All players thrive on confidence and goalscorers do. Before he got his goals, he was playing really well off the front because he’s such a clever player.

“We’ve got a trust in Liam that we can play him in several positions, but ultimately his best is up front where he bangs in the goals.”

Also in Scotland Niall McGinn scored a stunning 20-yard free-kick to help Aberdeen to a 2-1 home victory over Partick Thistle.

Meanwhile in the Barclay’s Premier League defender Gareth McAuley scored a trademark headed goal for West Brom in their 2-1 home defeat to Everton, his first for the club since last December.

Northern Ireland fans will also be buoyed by the news that the 36 year-old has opted to continue his International career and make himself available for the forthcoming World Cup qualifying campaign.

Although he is still awaiting his first Charlton Athletic goal striker Josh Magennis is proving to be a crucial player for the League One side after assisting in both goals for fellow frontman Nicky Ajose in the 2-1 win against Walsall.

“Josh did so well for the second goal; strong, turned his man and put in a great ball for Nicky.” said Addicks manager Russell Slade.

“The combinations and link-up plays between Nicky and Josh have been good, considering they’ve only played two games together.”

Elsewhere, MK Dons midfielder Ben Reeves, who was making his first appearance of the season, had his 76th minute penalty saved at Rochdale though the visitors did eventually go on to win the League One encounter 1-0.

Finally, Northern Ireland under-19 defender Chris Paul, who was released by Spurs in the summer, was on the substitute’s bench for Queens Park Rangers in their 2-0 reverse at Loftus Road to Preston North End.