Boys across the water - August 15 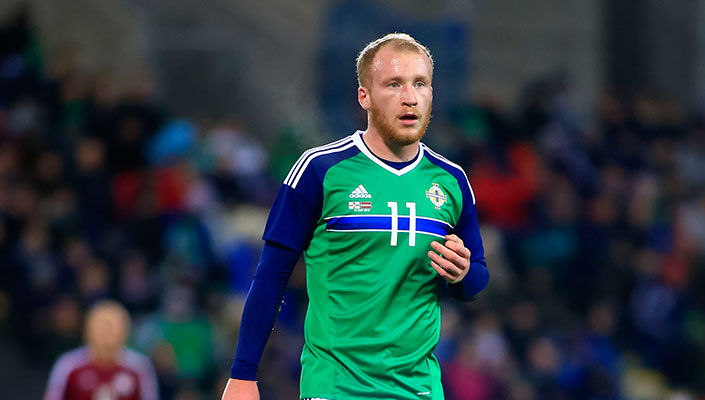 Striker Liam Boyce blasted home a hat-trick in Ross County’s’ 3-2 Highland derby victory over Inverness in the Scottish Premiership at the weekend.

After the game the former Cliftonville frontman, who had been without a goal in five appearances for County this term, dedicated his goals to his new baby daughter Scout.

“I’ll be giving the match ball to my daughter as it’s the first goals I’ve scored since she’s been born.” declared Boyce, whose treble on Saturday was his third hat-trick for the club. “It will be her first present, my first goals, and they came in threes.

“I hadn’t scored this season, so it was great to do it in such an important game. It was a bit nervous at the end but to get the win was very important to get us going in the season.

“The only time we beat Inverness last year was in the League Cup, so it’s good to get one over on them to get us up and running in the league.”

Meanwhile Will Grigg seems to be carrying on from where he left off last season after making it two in two games for Championship outfit Wigan Athletic who easily defeated Blackburn Rovers 3-0 at the DW Stadium.

Also in the Championship goalkeeper Michael McGovern made his debut for Norwich City when he replaced the injured Declan Rudd for the second half of the Canaries scoreless draw at home to Sheffield Wednesday.

Down in League One defender Ryan McLaughlin made his debut for Oldham Athletic after coming on as a substitute in the 0-0 draw with Walsall, while Josh Magennis made his debut for Charlton in their home draw with Northampton following his move from Kilmarnock last week.

In League Two, Lisburn teenager Ben Kennedy followed up his midweek League Cup winner at Ipswich with another goal in the 1-1 draw at Notts County.

Former under-21 striker Robin Shroot, now plying his trade in Norway with IL Hodd, scored his sixth goal in five games as his side defeated promotion chasing Levanger 3-2 at home to take his tally to nine for the season.

With the Premier League commencing over the weekend five of Michael O’Neill’s EURO 2016 stars were on duty for their clubs. Southampton’s Steven Davis and Watford’s Craig Cathcart came face to face at St Mary’s as the visitors opened their campaign with a 1-1 draw.

While West Brom had Gareth McAuley and Jonny Evans in their starting line-up as the Baggies claimed an opening day win at Crystal Palace.