Lafferty on target for Norwich 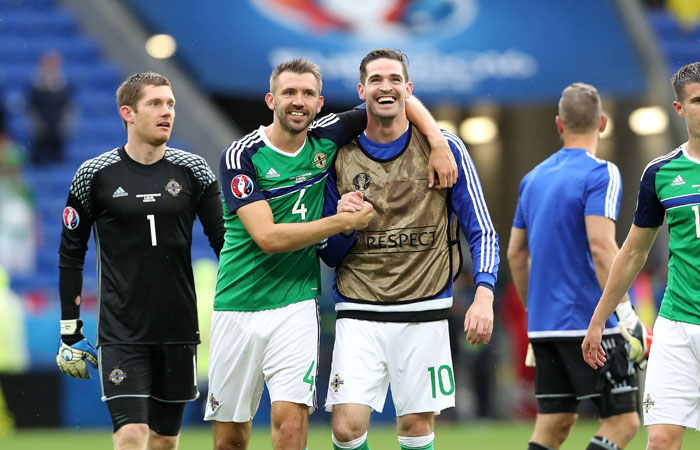 Kyle Lafferty got his season underway last night when he scored his first Norwich City goal in nearly a year as the Canaries progressed to the third round of the EFL Cup following a thumping 6-1 home win over Coventry City.

Norwich boss Alex Neill gave the Fermanagh-man his first start for the club since January 2015 and the 28 year-old repaid him by opening the scoring in the 25th minute and then assisting Sergi Canos for the second goal 11 minutes later.

After the game the former Hamilton manager was full of praise on Lafferty’s performance against the League One side.

“He has been involved. He has come off the bench in other games and this was as dominant as I have seen him in the air,” declared Neill.

“Generally I think with his size he could be more dominant. I felt he led the line well and had a good game. That is credit to him.

“He plays for his national team, he scores goals for them and there are certain games when he might be suited. He is very different from Cameron Jerome so he has something to offer.”

Elsewhere in the competition Gareth McAuley made it two goals in two games for West Brom after he put them in front at Northampton with another headed goal shortly after half-time, however the Baggies eventually crashed out of the competition to the League One side on penalties.

Meanwhile, former Northern Ireland under-21 midfielder Matty Lund stunned Queens Park Rangers last night when he gave Rochdale the lead at Loftus Road. The home side, who had Conor Washington in their starting line-up, fought back though to win the tie 2-1.

Ollie Norwood will be looking forward to this evening’s third round draw after his Brighton & Hove Albion side won 4-2 at Oxford United.