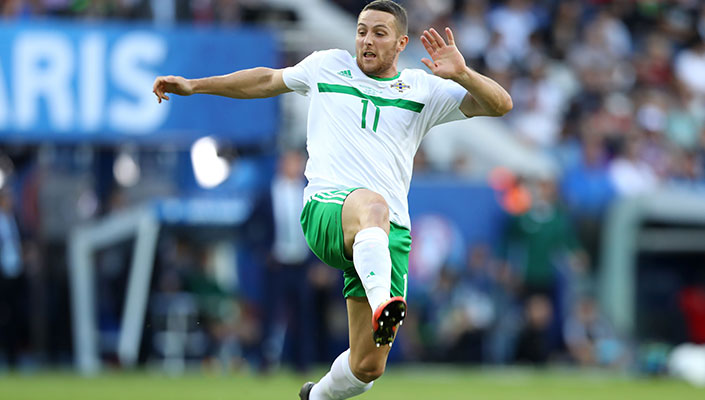 Conor Washington ended his barren spell in front of goal when he opened his account for Queens Park Rangers in their first round EFL Cup clash with League One Swindon Town last night.

After setting up the Hoops opener for Yeni Ngbakoto, the 24 year-old, who joined the west London side in January for a fee of £2.8 million, netted his first goal for the club in the 93rd minute to put them 2-1 up in the opening period of extra time.

Hoops manager Jimmy Floyd Hasselbaink was delighted Washington had finally got off the mark and feels the goal will now kick-start his season.

“Conor’s goal will do him the power of good. I'm pleased for him,” said the former Dutch international striker. “He had it a little difficult tonight but there’s so much more to come from him.”

In fact it was quite a night at Loftus Road for Northern Ireland players as former Glentoran winger Jordan Stewart scored his first ever Swindon goal with a terrific volley to take the game into extra-time.

After the match ended in a 2-2 draw, both Washington and Stewart scored their respective spot-kicks for their clubs in the ensuing penalty shoot-out which Queens Park Rangers eventually won 4-2 to set up a home tie with Rochdale in the next round.

Elsewhere in the competition, defender Conor McLaughlin was in the Fleetwood Town side that lost 5-4 on penalties to Leeds United (2-2 aet), while striker Josh McQuoid was an unused substitute for Luton Town who pulled off the shock of the night when they defeated former League Cup winners Aston Villa 3-1 at Kenilworth Road.

In Scotland Niall McGinn scored his second of the season as Aberdeen overcame Ayr United 2-1 at Somerset Park to progress to the third round of the Betfred Cup.