Midweek Boys Across the Water 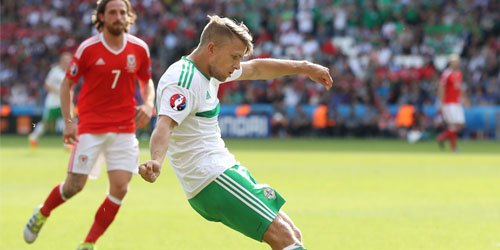 Northern Ireland forward Jamie Ward got his season off to a flying start after grabbing an injury time winner for Nottingham Forest in their EFL Cup tie at Doncaster Rovers last night.

The 30 year-old struck in the first minute of added time at the Keepmoat Stadium to secure a 2-1 win for the visitors but admitted it was far from a straightforward victory over the League Two side.

“The most important thing was to get through to the next round,” said Ward, who was making his first appearance of the season. “There was probably a ten-minute spell where we looked in trouble but we worked hard and got the rewards right at the end.

“It was good to have an experienced side out there. Doncaster made it really tough for us as we knew they would and we needed all of that experience to help get us through and get the right result.

“It was a great move for the winner, Pato got into the gap and played me in inside the penalty area and all I had to do from there was finish it.”

However the result of the night was without doubt League Two Stevenage putting out Mick McCarthy’s Ipswich Town at Portman Road thanks to a goal from Northern Ireland under-19 International Ben Kennedy.

The attacking midfielder, who scored the only goal of the game eight minutes after the break, is now looking forward to landing a Premier League club in the next round of the competition.

“I would love to draw a Premier League team next,” declared the Lisburn man, “Anyone will do. I just want to get myself on the big stage.

“It was a great team performance and every man was brilliant. I was gutted not to play on Saturday (when Boro lost 2-1 to Crewe in the league) but that’s football. It just shows you what sort of squad we have and everyone sticks together.”

Elsewhere in the competition Will Grigg, who bagged 28 goals for Wigan last term, opened his account for the season in the Latics surprise 2-1 defeat at Stephen Robinson’s Oldham Athletic who had new signing Ryan McLaughlin on the bench.

Meanwhile, Brighton & Hove Albion gave midfielder Oliver Norwood his debut for the club as they cruised to a 4-0 home victory over League One Colchester, while under-21 defender Luke Conlan laid on one of the goals in Morecambe’s thrilling 5-4 extra time win at Rotherham United.