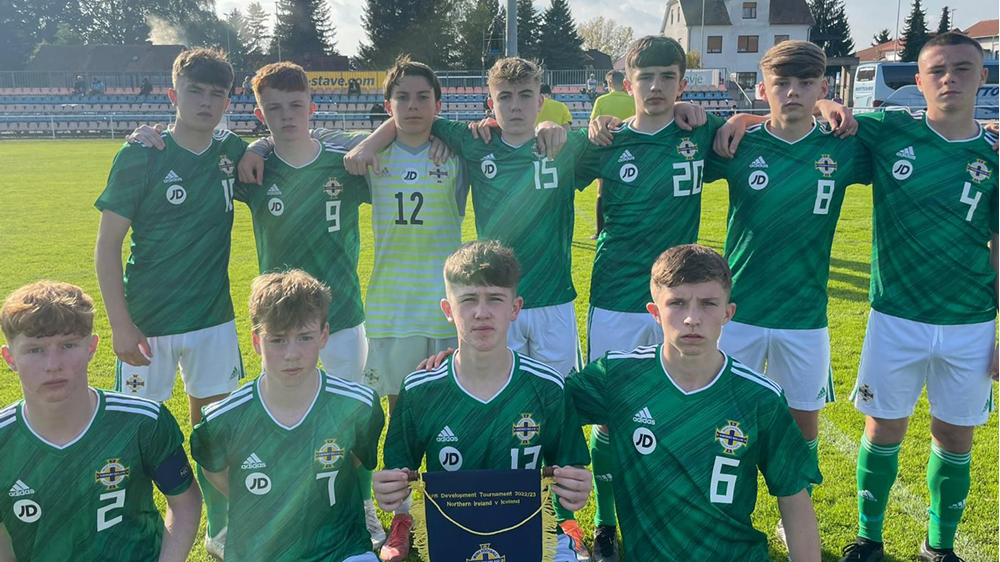 Northern Ireland Under-15s produced some great football, despite being down to 10 men for most of the match, as they narrowly lost out to Iceland’s U15s in an entertaining encounter this afternoon.

The game, in a UEFA U15 development tournament, ended 3-3 after regulation time but Iceland won it after outscoring Northern Ireland 3-2 in a penalty shootout.

It was Northern Ireland’s first game in the four-team tournament which is being staged in Slovenia and also features Slovenia and Luxembourg. And it was also a first taste of international football for the young players on both sides.

Today’s encounter, played at the Brezice Stadium, was packed full of drama. Northern Ireland went two up and appeared to be cruising before a dismissal close to the half-hour mark swung the game in Iceland’s favour.

Iceland subsequently scored three times before the boys in green and white, who held a good shape and created several openings despite being a man short, deservedly equalised in added time. But unfortunately they were then beaten on penalties.

Michael McClean’s side battled hard at the ground in eastern Slovenia against a physically strong Icelandic team.

Early on Iceland attacking midfielder Karan Gurung had a penetrating run but was stopped in his tracks, while Iceland midfielder Mihajlo Rajakovac’s goalbound shot was blocked.

On 10 minutes Northern Ireland took the lead. Caedach O’Neill, who had an excellent game, was pushed to the ground on the edge of the area and he picked himself up and beat the keeper at the near post with a well struck free-kick.

In the 19th minute midfielder Darragh McCann scooped a shot just wide of the target.

Five minutes later Northern Ireland got their second. Jack Faloona fed O’Neill inside the area and he cleverly turned his marker before planting the ball in the far corner of the net. It was a lovely finish.

Iceland captain Gunnar Olsen was tackled by defender Jayden Charnley as he threatened to get a shot away from close range.

On 26 minutes O’Neill got in behind the Icelandic defence and dinked the ball over the keeper to Scott Hamilton six yards out, however his low shot was superbly cleared off the line by centre back Ketill Ketilsson.

Two minutes later Northern Ireland defender Kian Maynes was given a straight red for his challenge on centre forward Viktor Sverrisson as he ran towards goal. The ref adjudged Maynes was the last defender and had prevented a goalscoring opportunity.

Iceland pulled a goal back when Tomas Kristjansson curled the resulting free-kick into the corner of the net from 22 yards.

Towards the end of the half Northern Ireland had to defend resolutely, and Charnley produced an excellent tackle to thwart Olsen on the edge of the area.

However, Iceland equalised on the stroke of half-time when Gurung controlled a headed clearance 22 yards out and found the net with a looping volley.

Keeper Milo Beimers plucked a Gurung shout out of the air, while Iceland keeper Arnar Porsteinsson raced off his line to clear as O’Neill threatened once again.

Beimers comfortably saved a shot from Rajakovac before Iceland made it 3-2 in the 54th minute through substitute Viktor Dadason.

O’Neill went on a great run down the left flank but no-one could get on the end of his cross. And then Northern Ireland substitute Jay McEvoy shot straight at the keeper.

Beimers saved well with his feet when Iceland sub Asgeir Steinarsson let fly from just inside the area.

A sustained period of pressure brought Northern Ireland the reward they deserved as the game moved into added time. McEvoy found onrushing full back Alex Watson at the back post and he drilled the ball into the net.

But Iceland scored twice and their keeper saved from McEvoy and fellow sub Daniel Fox to send it to the final penalty. Watson had his spot kick saved and Iceland sub Kristofer Ludviksson scored his to make it 3-2.

Northern Ireland U15s will be in action again on Thursday (13 October) against Slovenia. That game (3pm start UK time) is being staged at the stadium in Catez, which is in the Brezice area.

And their final game of the tournament is against Luxembourg on Sunday (16 October). It’s due to kick off at 9am UK time at the Brezice Stadium.