The Irish FA has been working with football clubs at all levels across Northern Ireland to demonstrate their value within their communities.

In collaboration with UEFA, the association is quantifying the value of football participation here.

Last year, using the Social Return on Investment (SROI) model developed through UEFA’s GROW programme, the association was able to reveal that football in Northern Ireland has social, economic and health benefits that add up to £470 million per year.

SROI is a form of cost benefit analysis that attempts to quantify the social change created by a programme, policy, investment or entity. It is a particularly useful form of analysis for not-for-profit organisations which seek to generate positive social changes that are difficult to measure in traditional financial terms.

Following the analysis into its own work, the association has been supporting football clubs at all levels here to go through the latest version of the SROI model (V3). More than 40 of UEFA’s 55 member associations are currently enrolled in the process.

We believe that it is vital for sports clubs to be totally integrated into their local community for not only sport but also non sport activity. The impact football clubs can have on their community is huge and should not be underestimated

The analysis of more than a dozen clubs in Northern Ireland found SROI values ranging from just under £1m to nearly £8m.

Over the summer the following clubs have discovered their value to their communities: 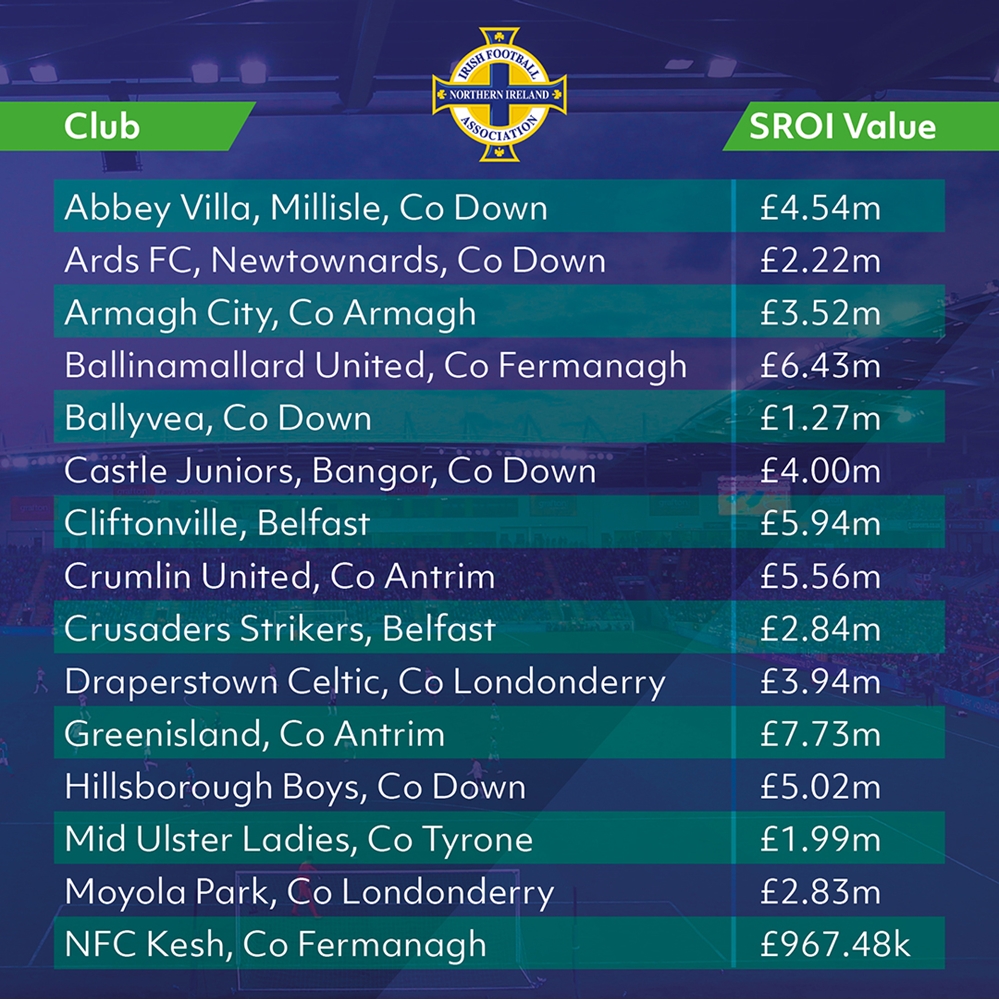 The UEFA SROI research across Northern Ireland in 2021, supported by the Irish FA, found the country’s 70,000 registered football players and 18,000 football volunteers made a £77.68m contribution to the economy and generated the equivalent of £262m in social benefits and £131m worth of savings in healthcare.

Elaine Junk from Mid Ulster Ladies said of this year’s more localised research: “It is gratifying to know that not only are we helping young girls and women physically and mentally through the medium of sport but the overall benefits to our community in terms of the economic and social impact are more far reaching when the social return on investment is considered.”

And Crumlin United’s Tom Peake insisted: “We believe that it is vital for sports clubs to be totally integrated into their local community for not only sport but also non sport activity. The impact football clubs can have on their community is huge and should not be underestimated.”

David Spiers from Moyola Park said his club is always looking to provide benefits for the Castledawson community.

“We were acutely aware of our impact within our local community and wider region in providing a positive impact on the mental, physical and social wellbeing of our members, but it’s not often we would get the chance to sit back and reflect on this and study the actual financial benefit our club helps to provide to other services in the area,” he pointed out.

Derek Sharpe from Ballinamallard United pointed out: “We feel we can add further value to Fermanagh and South Tyrone by showcasing the excellent work already carried out by the club and attracting investment to further the services provided by the club.”