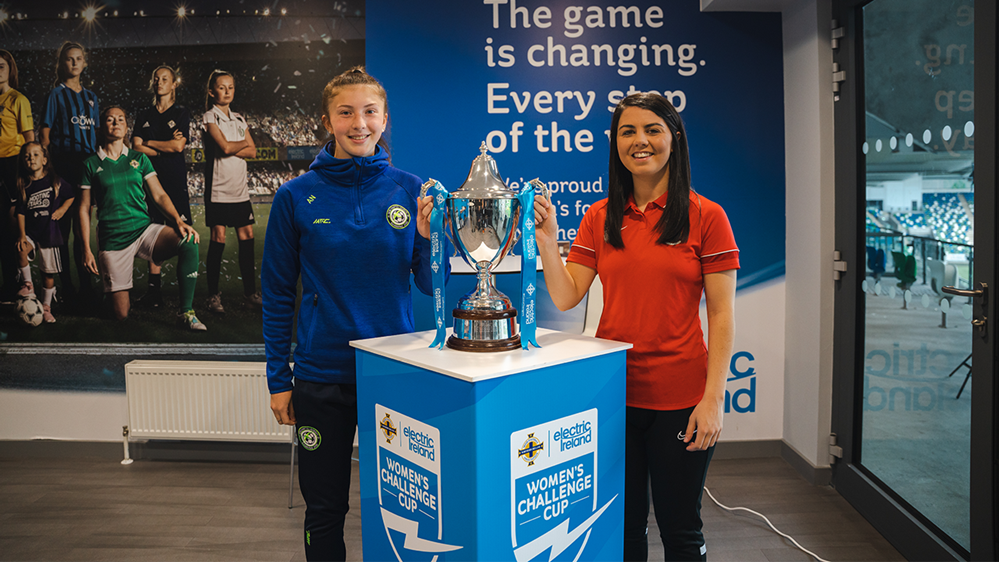 Glentoran Women and Sion Swifts face off in this season’s Electric Ireland Women’s Challenge Cup final on Saturday 5 November, with both side’s hoping to successfully cap off a momentous year for the women’s game in Northern Ireland.

Glentoran’s Jess Foy and Swifts’ Aimee Neal met today at the National Stadium to look ahead to showpiece fixture. In a history making year for women and girl’s football in Northern Ireland, with the senior women’s team reaching a first ever major tournament at the UEFA Women’s EURO, it also represents a first for Neal in her fledgling career:

"The big one for us is the Irish Cup and it always has been. It's always been my dream to play at Windsor Park since I started playing football. I've always watched the Northern Ireland Women's team play and thought about playing there myself some day. It is a dream come true, not only for Sion, but for me personally."

Foy, on the other hand, returns as a defending champion hoping to make a hat trick of successive cup final wins. Having represented Northern Ireland at senior level, she knows the task ahead of her this Saturday.

"We know it's going to be a really tough game for us, every time we've played Sion this year they've put up a great challenge against us. We have to go out and focus on us, it's what we've done all year and hopefully we'll be on the right side of the result and be able to lift the trophy."

The game kicks off at 5.30pm and tickets can be purchased from the link below.