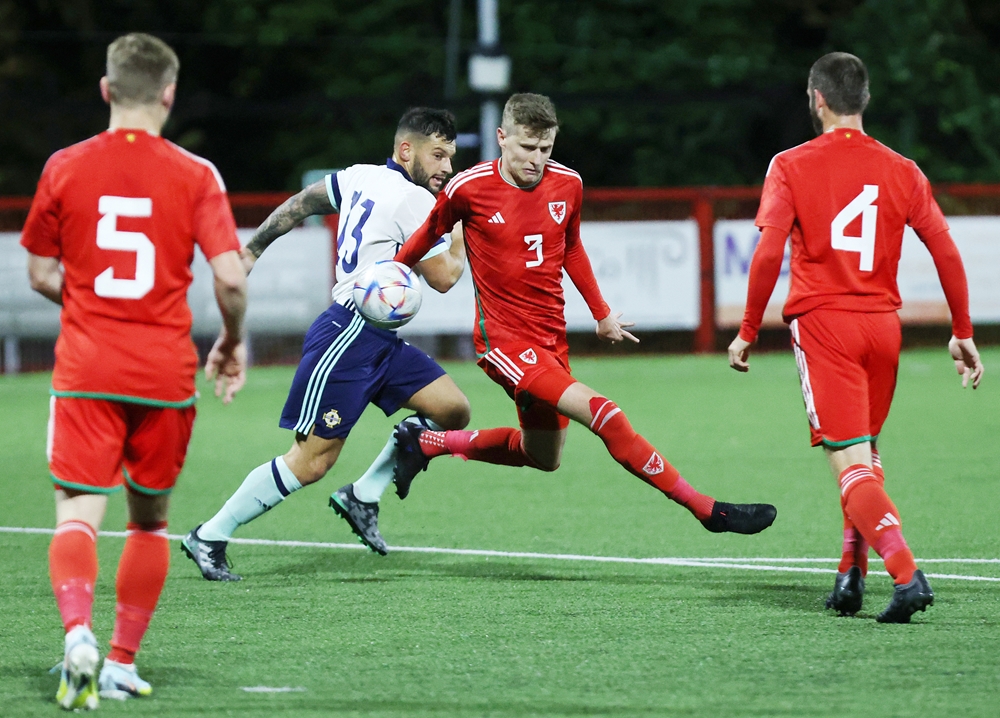 The regional team representing Wales (Tim Rhanbarthol Cymru) were the visitors to Larne and Harry McConkey’s side lost out 3-2 to them after conceding late on. 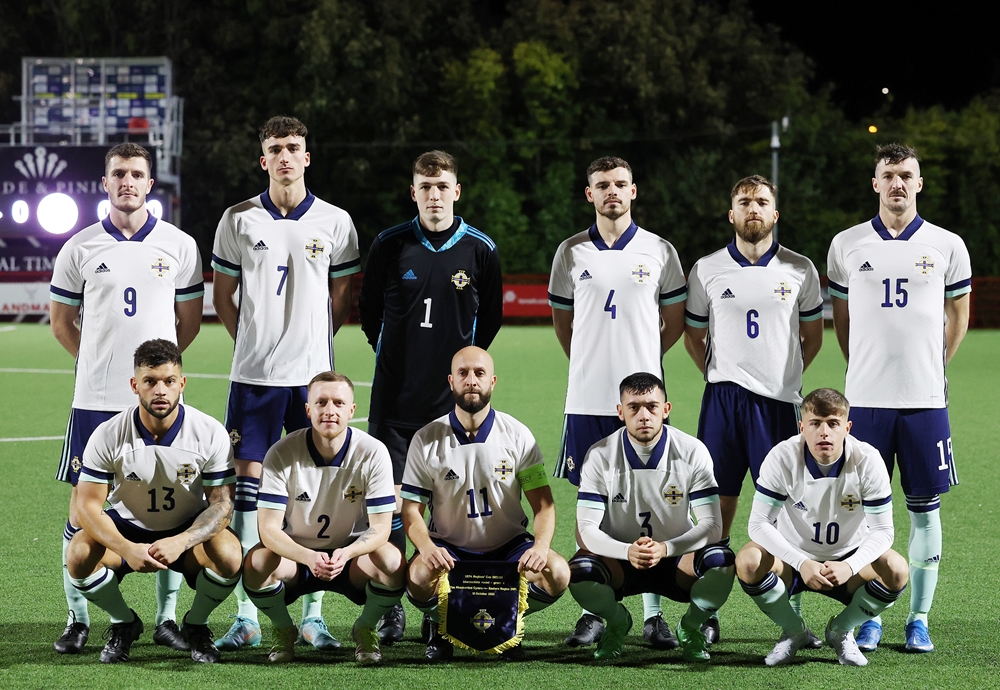 Last night’s Intermediate Round Group 4 matchday one game at Larne FC’s home was a pretty even affair. The Welsh were slightly more dominant in the first half, while Northern Ireland were largely on top after the break.

A draw would have been a fair result, however the Welsh nicked it with a goal three minutes from the end of regulation time.

Northern Ireland made a bright start and on eight minutes influential captain Barry McKervey opened the scoring from the spot. Norwegian referee Kai Steen awarded the penalty after winger Ciaran Heggarty was upended by Wales captain Sam Downey inside the area. McKervey drilled the ball into the net.

Wales equalised three minutes later when Cai Roberts turned a cross into the net at the back post.

Winger Dylan Allshorn produced a superb mazy run into the area, leaving a couple of defenders in his wake, but was eventually stopped in his tracks by the Northern Ireland defence.

McKervey tested Welsh keeper Rob Dascalu with a stinging low drive from the edge of the area which Dascalu managed to push past the post.

A long throw from Richard Gowdy found Heggarty in the area, however he could only guide his header wide of the target.

Gowdy lobbed the ball forward to Adam Neale, however he failed to connect with the ball properly, and then Northern Ireland had a let-off when Matthew Hill lobbed the onrushing Hunter but his effort hit the side netting.

Wales took the lead in the 32nd minute when Allshorn delivered a pinpoint cross for Chris Cathrall and the defender headed the ball powerfully past Hunter.

Welsh keeper Dascalu pushed out a strong Heggarty header as the game ebbed and flowed.

On the stroke of half-time Alan McMurtry delivered a dangerous cross from the right flank, however Dascalu managed to clutch it. 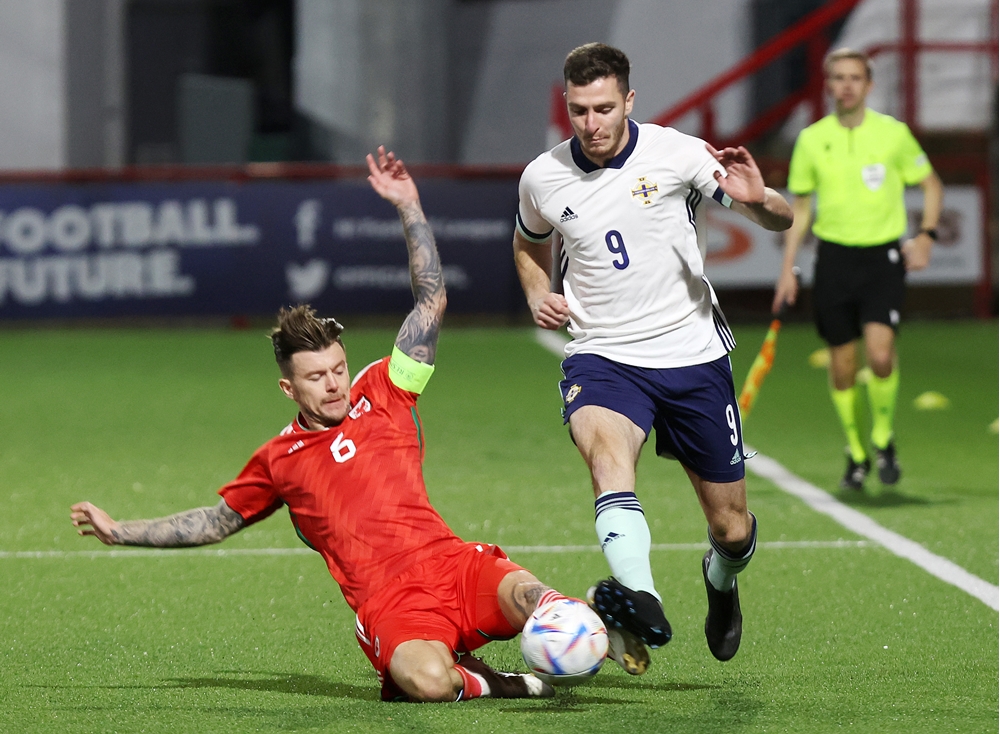 Northern Ireland enjoyed more possession after the break. Defender Daniel McMurray guided the ball over the top from a McKervey corner and Newell shot tamely at the Welsh keeper.

Substitute Leon Bonnes found McMurtry at the back post but he could only guide his header across the face of goal.

Gowdy launched a throw into the area which was headed over the bar by McMurray as Northern Ireland went in search of an equaliser.

And they deservedly drew level on 75 minutes when a headed clearance dropped to McKervey 30 yards out and he smashed it home via a deflection off a Welsh defender.

A minute later Heggarty got in behind the Welsh defence, however he missed the target.

Lovely combination play between Jack Reilly and Patrick Downey set Reilly free down the flank. The left back produced a powerful strike but unfortunately it whizzed across the face of goal.

Wales grabbed the winner against the run of play on 87 minutes. McMurtry upended Hill on the edge of the area and Allshorn stepped up to guide the ball around the wall into the bottom corner. It was a neat finish.

McMurtry was shown a yellow card for the foul that led to the penalty and he got his marching orders minutes later for a rash challenge.

Right at the death McMurray got on the end of a flick-on but could only guide his shot over the bar.

In yesterday’s other group game, which was also played at Inver Park, Zlin hammered Region of Gothenburg 8-1.

Next up for Northern Ireland is an encounter with Region of Gothenburg at Inver Park on Thursday (8pm start). The Welsh and Czech teams are due to meet at Crusaders’ Seaview Stadium at 2pm on the same day.

The final matchday is on Sunday (16 October) when both games will kick off at 2pm. The Welsh and Swedish representative teams will meet at Inver Park, while Northern Ireland will lock horns with Zlin at Cliftonville FC’s Solitude Stadium.