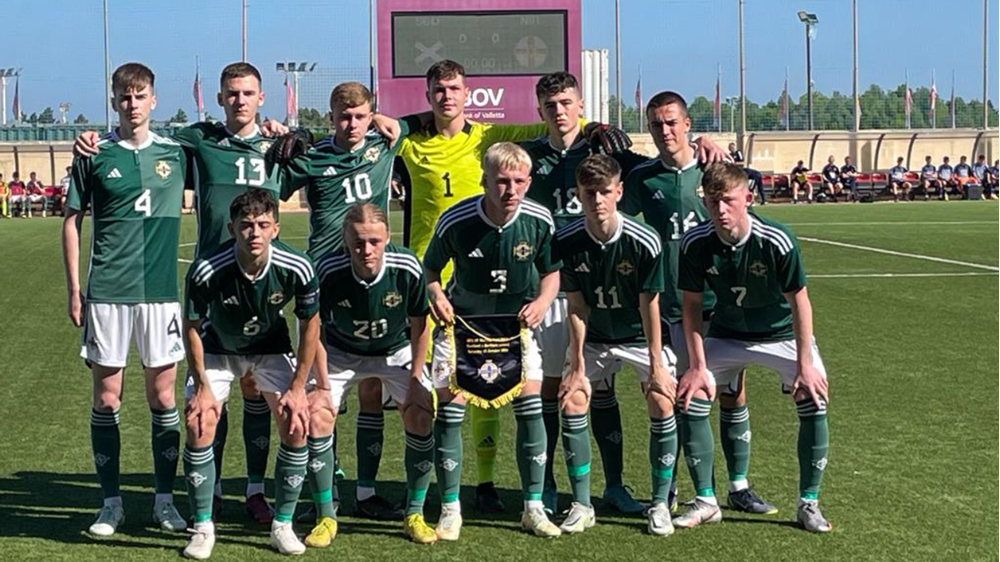 Northern Ireland U17s boss Gerard Lyttle made two changes from the starting eleven in the first qualifying round match against Czech Republic, which ended in a 1-1 draw.

Ben McGonigle, an unused sub against the Czechs, started the game along with Kenzie Beattie, who came off the bench in game one. James Douglas and Oscar Kelly both dropped to the bench for this one, which was played in warm conditions.

Scotland had the first chance of the game on three minutes, however midfielder Rudi Allan-Molotnikov steered his effort wide.

Northern Ireland had a great chance to open the scoring on 11 minutes when Ben McGonigle found space down the middle and raced towards goal, however his shot was pushed out by Scotland keeper Rory Mahady.

And they doubled their lead two minutes later. Midfielder Bobby McLuckie broke down the left and squared it for Wilson to tap home.

On 37 minutes Northern Ireland keeper Lorcan Donnelly produced a superb save to keep out a Rory MacLeod piledriver.

Northern Ireland pushed forward after the interval. Attacker Rhys Walsh was just off target before Donnelly made a save from McLuckie.

Donnelly was called into action on a couple of occasions, thwarting Wilson and McLuckie once again, before Scotland grabbed a third in the 72nd minute.

Full back Josh Dede swung in a cross from out wide and substitute Jacob MacIntyre steered the ball home from close range.

MacLeod hit the woodwork as Scotland, who defeated Malta 6-0 in their opening group game, looked to extend their lead. Northern Ireland substitute James Bleakley put a shot wide in the closing stages, while Donnelly prevented Wilson from completing a hat-trick with a smart save.

“The first 25 minutes or so we were really good in terms of our shape and our discipline out of possession. We nullified Scotland and frustrated them. We also created a great opportunity to go one up. Ben McGonigle was clean through but their keeper made a great save.

“Then we switched off at a corner and they went and scored, and that was disappointing. Unfortunately the players’ heads dropped and we conceded straight away.

“We started the second half well and had a couple of good plays, however Scotland had done enough by then. All in all it was not a bad performance but obviously it was a disappointing result.”

Northern Ireland will complete their Group 4 qualifying round campaign with a match against mini tournament hosts Malta on Tuesday (25 October) at the same venue. It’s a 3pm start UK time.

If Scotland defeat the Czechs on Tuesday - the Czechs beat Malta 5-0 this afternoon - then Northern Ireland could still go through if they rack up the goals against the Maltese.

The top two teams in 13 groups in the UEFA Euro U17 2023 qualifying round will join top seeds Netherlands and Spain in the spring 2023 elite round along with the four third-placed teams with the best records against the top two in their section.