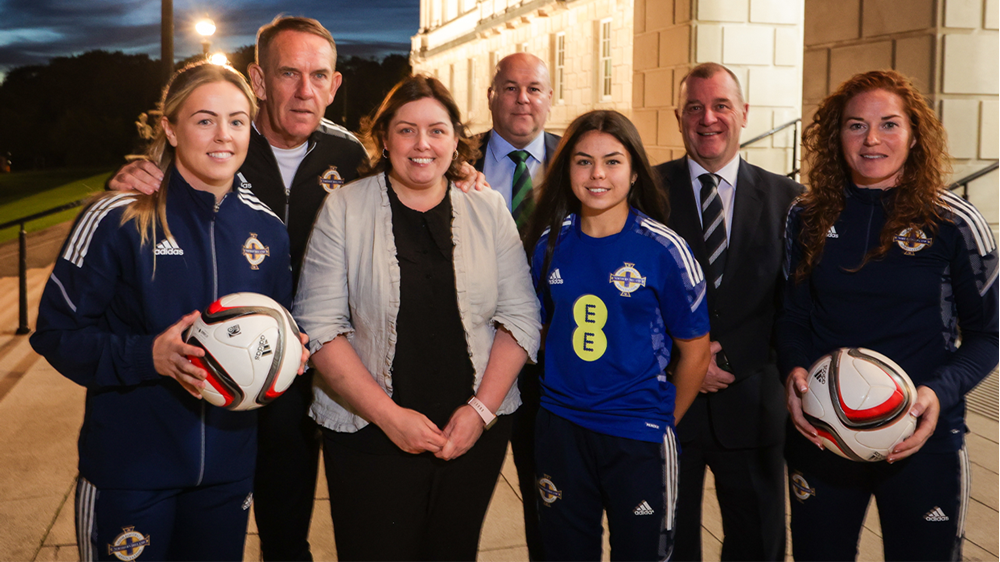 Northern Ireland senior women’s team were recognised for their historic achievements at UEFA Women’s Euro 2022 at a Stormont reception this week.

Communities Minister Deirdre Hargey MLA hosted manager Kenny Shiels and members of the squad who took part in the tournament in England in July. She took the opportunity to praise the players and staff following the team’s first ever major tournament and highlighted the legacy created for women in sport in Northern Ireland.

Northern Ireland captain Marissa Callaghan along with Simone Magill and Joely Andrews took part in a panel discussion about their experiences in Southampton where the team was based and the importance of inspiring a new generation to participate in football.

Midfielder Andrews said: "It’s like we say, if you can’t see it, you can’t be it. The fact young girls now have role models to look up to and seeing women play professional football is massive. If we’re there for people to look up to and the pathway is there, then we can keep growing the game of girls’ and women’s football.”

He said: "I would like to thank the Communities Minister Deirdre Hargey MLA for hosting and Justice Minister Naomi Long MLA as well as Health Minister Robin Swann MLA for co-sponsoring this special event to recognise the history-making Northern Ireland Women's Euro 2022 squad. The Northern Ireland senior women are inspiring a new generation of participation in football and deserve government support to maximise the impact they can achieve.

"I was glad to make the case for government investment in women's and girls' football and the Sub Regional Stadia fund which is essential to increase the many benefits of football for all. I acknowledge the ongoing work of the Communities department on the Sub Regional Stadia programme and would call on all political parties to restore the Northern Ireland Executive in order to release this much-needed funding for the benefit of communities across Northern Ireland."