Harry McConkey insists he will be taking one game at a time as another UEFA Regions’ Cup adventure begins.

McConkey has been boss of the Northern Ireland junior international team (featuring junior and intermediate level players) for well over a decade but the Ballinamallard United manager still gets excited at the prospect of pitting his wits against international opposition.

The Irish FA is hosting a UEFA Regions’ Cup intermediate stage four-team mini tournament over the next seven days.

Intermediate Round Group 4 kicks off today with Zlin Region from Czech Republic taking on Region of Gothenburg from Sweden at Larne FC’s Inver Park Stadium (2pm).

And tonight McConkey’s Northern Ireland side will host Tim Rhanbarthol Cymru from Wales at the same venue (8 o’clock start).

As a manager my lasting joy comes from seeing players developing from our regions teams and junior internationals. They can grab the stage and get noticed very easily. You only have to ask Stuart Dallas, Michael Smith and Joel Cooper to name but a few

It’s a cliché but the veteran manager says he will be taking one game at a time in the mini tournament.

He pointed out: “My experience as a UEFA Regions’ Cup manager tells me that like in any international tournament you need things to really go for you in that first game.

“The positive momentum gleaned from a good first day can really help drive your squad into the next two games. Consequently we must not look beyond this evening’s game against a strong, physical Wales squad.”

The second set of matches on Thursday (13 October) are split between Crusaders FC’s Seaview Stadium and Inver Park. The Welsh and Czech teams will meet at Seaview at 2pm, while Northern Ireland, represented by the Eastern Region, are back at Inver Park to take on the Swedes.

The final matchday is on Sunday (16 October) when both games will kick off at 2pm. The Welsh and Swedish representative teams will meet at Inver Park, while Northern Ireland will lock horns with Zlin at Cliftonville FC’s Solitude Stadium.

And there is free admission to all the games.

McConkey has chosen an 18-strong panel to compete in the four-team tournament. It features players from the NIFL Championship, NIFL Premier Intermediate League and various other amateur leagues. UEFA’s criteria says that players involved in the Regions’ Cup must never have played professionally or in a country’s top flight.

In the run-up to this week’s action McConkey and his assistant Gerald Boyle have been putting the players through their paces at training sessions each Sunday at either Belfast’s Danny Blanchflower Stadium or Stangmore Park in Dungannon, while the team have played friendlies against a Cliftonville Select and two against Republic of Ireland.

The Northern Ireland boss explained: “These group of players and staff are true amateurs and I absolutely love working with them. The sacrifices made regarding time, travel and in many cases loss of wages and family holidays cannot be underestimated but these people truly love their sport and what it gives to them in other ways.

“As a manager my lasting joy comes from seeing players developing from our regions teams and junior internationals. They can grab the stage and get noticed very easily. You only have to ask Stuart Dallas, Michael Smith and Joel Cooper to name but a few.” 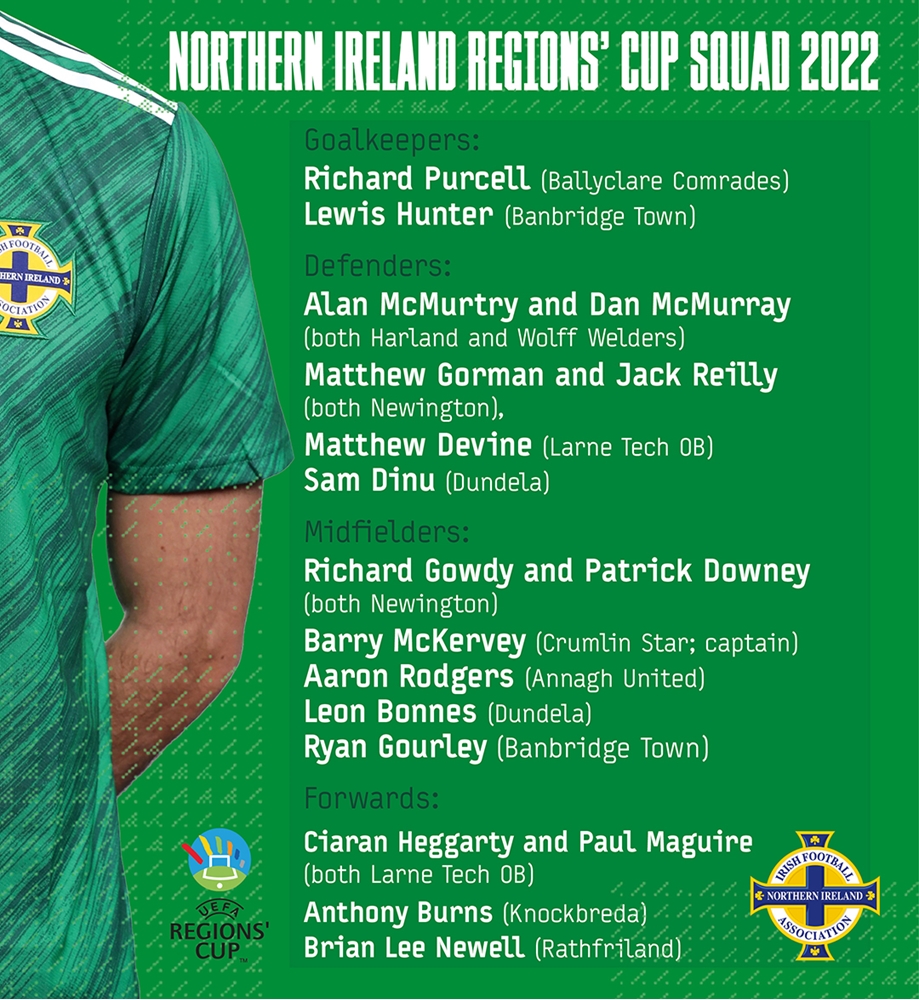 Midfielder Leon Bonnes and defender Sam Dimu, who both play for Dundela, are also ones to watch, according to the manager.

The Northern Ireland boss further believes his three “experienced old hands” will be very valuable. They are midfield orchestrator and captain Barry McKervey (Crumlin Star), central defender Daniel McMurray from Harland and Wolff Welders and Larne Tech OB striker Paul Maguire. He said they had all “been there and done it”.

And he also pointed out that both Newington and Larne Tech OB have three players apiece in the squad and the two clubs “can be very proud of this fact”.

The UEFA Regions’ Cup competition for amateur international teams was not played across 2020 and 2021 due to the Covid pandemic. However, it’s back for 2022 and 2023, and the winners of a series of intermediate stage mini tournaments this autumn will go forward to the finals next summer (dates and venues TBC).

McConkey further pointed out: “How wonderful it is to be able to bring the Regions’ Cup back to our calendar after all this time.

“The players at this level of our game have undoubtedly been deprived of so much competitive football due to the awful Covid pandemic.

“We are simply so grateful to have our health and want to really embrace the coming days where we can binge on a festival of competitive games against Wales, Sweden and the Czech Republic.”